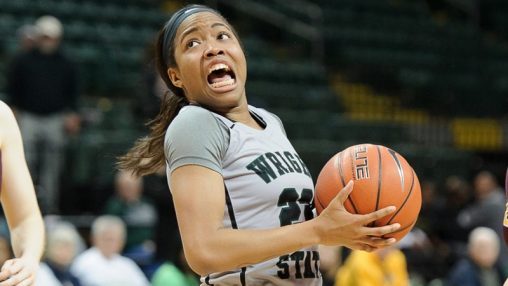 Wright State women’s basketball coach Katrina Merriweather wishes she had five Chelsea Welches. She wouldn’t have to worry about who would play the point or post because the 5-foot-9 Welch can guard all five positions and score from any spot on the floor.

That’s why the senior from Fairmont High School was named the preseason Horizon League player of the year last week. She led the conference in scoring with an 18.6 average last season, was fourth in steals at 2.1 and ninth in assists at 3.2.

“She’s got a great body, broad shoulders, and, obviously, at about 5-9 or 5-10, she’s very versatile in that she can make a 3, so she’s not just a driver,” Merriweather said.

“She’s also a very good defender. What she does for us, picking up the ball and the deflections she gets because of her size — she’s really, really athletic. Every once in a while, she’ll do something that makes you go, ‘Wow.’ She’s really good on both sides of the ball, and that’s what makes her so valuable to us.”

Merriweather appreciates Welch even more for how she sets the tone with her attitude.

“The best thing about Chelsea is she’s our hardest worker. She’s extremely humble, and you wouldn’t be able to tell she was our best player (by the way she acts) in practice because she’s in every single drill and every rep.”

The Raiders, picked second in the Horizon League preseason poll in a vote of coaches, media and sports information directors, return all five starters from a team that won a share of the league crown and finished 25-9 overall. Co-champ Green Bay was picked first.

“I would argue with anyone that Lexi is the most effective 5-foot-10 ‘five’ player in the country,” said Merriweather, meaning a true center. “She does a great job rebounding, and on those nights when we’re having a tough time shooting, she’s the main reason we stay in games.”

Vogelpohl had shoulder surgery in July and was held out of early contact drills, but she’s back to full strength.

“She looks awesome, especially in the open court. She’s so fast with the ball in her hands. It’s going to really help us push the ball in transition,” said Merriweather, who was named Horizon League coach of the year after taking over for Mike Bradbury last season.

“But what we have to do before that is make sure our rebounding is on par. That’s a big emphasis for us right now. As much fun as it is to run, you can’t run if you don’t get defensive rebounds.”

Haney shot a 4-over-par 220 for the first top-five showing of his career. Teammate Chris Rossi, a senior from Fairfield, tied for sixth at 221.

Wright State concludes its fall season in the Dayton Flyer Invitational on Monday and Tuesday at NCR South.

Jewell became the full-time keeper in the fifth game and has posted five shutouts in 10 outings.

The Raiders, 8-6 overall and 3-2 in the conference, visit IUPUI on Friday.