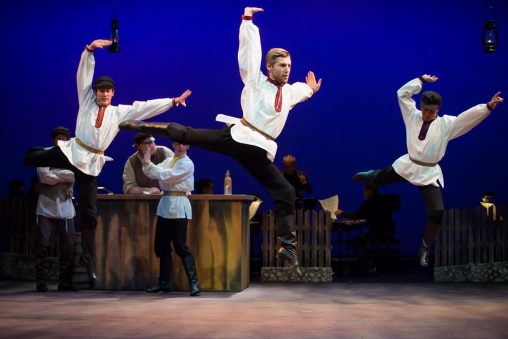 Wright State Theatre’s production of “Fiddler on the Roof” runs from Nov. 2 to Nov. 19 in the Festival Playhouse in the Creative Arts Center. (Photos by Erin Pence)

Wright State University Theatre continues its 43rd season with the popular musical “Fiddler on the Roof,” running from Nov. 2 to Nov. 19 in the Festival Playhouse in the Creative Arts Center.

Adored by fans for generations, “Fiddler on the Roof” features treasured show tunes like “Matchmaker,” “If I Were a Rich Man” and “Sunrise, Sunset.”

The original production of “Fiddler on the Roof,” directed and choreographed by Jerome Robbins, opened on Broadway in 1964 and won nine Tony Awards, including Best Musical, score, book and choreography. It is one of the longest-running Broadway musicals, with many revivals and tours, and a renowned film adaptation in 1971.

The story centers on Tevye, the father of five daughters, and his attempts to maintain his Jewish religious and cultural traditions as outside influences encroach on the family’s lives. He must cope with his three older daughters, who wish to marry for love and move further from traditional ways, and with an edict of the Tsar that evicts Jews from their village.

“We live in a time of refugees, with seemingly every news cycle depicting the plight and the flight of families and communities across the globe, from Syria to Africa,” said W. Stuart McDowell, who is directing the production and is artistic director of the Department of Theatre, Dance and Motion Pictures. “‘Fiddler on the Roof’ speaks to us about the story within these stories — of love, of passion, of faith, of community and of persecution and resolution to move on, to seek a new life in a distant land and to prevail.”