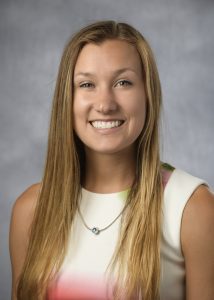 Julia Hitchcock, who graduated with a degree in biology from Wright State, is the recipient of the four-year Boonshoft Scholars scholarship.

During the middle of a cheer performance in high school, Hitchcock’s shoulder partially slid out of joint during one of her flips. Reflexively, Hitchcock grabbed and stabilized her shoulder. A teammate’s father, who is a doctor, checked her shoulder immediately after the performance.

“As the doctor checked my shoulder, I realized he was ready to help in times of need wherever he went,” she said. “Whenever I have contemplated my career path, the picture of him checking on my condition always flashes through my mind. I want to have the skills to help anyone at any time, just as he helped me.”

“This is a big honor. It’s really humbling,” Hitchcock said. “Not having to worry as much about tuition helps me focus on my medical school studies more.”

While her shoulder injury during the cheer performance inspired her to go into health care, her next steps on her path to medical school began at Wright State, where she became a pre-nursing student. After graduating from Dayton Christian School in Miamisburg, Hitchcock chose to attend Wright State, where her older sister, Katy Hitchcock ’15 was studying.

“My grandma was a nurse. I knew that I wanted to help people in the medical field,” she said. “But during anatomy class, I discovered my passion for learning how the body works. I was hungry for knowledge, and I did not want the class to end.”

Some of her pre-nursing classes were located in the medical school.

“I was surrounded by excited medical students and photos of doctors with patients,” she said. “As I walked through the medical school for my classes, the idea of becoming a doctor tugged at me.”

So, Hitchcock changed her major to biology. She signed up for summer classes that kept her at school for 12 hours a day. She also minored in Spanish and was an intermediate Spanish instructor. She took a mission trip to the Dominican Republic in July 2015 and shadowed medical doctors seeing patients. She helped administer food to people in need. She also helped with translation.

At Wright State, Hitchcock was a researcher in the lab of David R. Ladle, Ph.D., associate professor of neuroscience, cell biology and physiology. She did her honors thesis project in Ladle’s neuroscience lab.

In addition, she was treasurer and then became president of the Anatomy Club. She became a teaching assistant for anatomy classes.

“I enjoy teaching things to people and making it clear for them,” she said. “Anatomy is what called me to become a doctor. I love teaching anatomy.”

Despite a busy schedule, Hitchcock found time to be a LEAP conversation partner. The LEAP (Learning English for Academic and Professional Purposes) program provides full-time, intensive English instruction for international students. As a LEAP conversation partner, she met with international students in the program, who wanted to practice their English.

“I enjoyed being a LEAP conversation partner,” she said. “I made new friends and learned about different parts of the world.”

She continued to teach gymnastics while she was in college. She had begun teaching gymnastics to kids when she was a junior in high school.

“This job had a huge impact on my own character development. I learned what it meant to be a leader,” she said. “Working as a coach also helped me to work as part of a team with other coaches. I learned how to work with people who had different ideas.”

She also shadowed a doctor in the emergency room at Miami Valley Hospital.

“I had the opportunity to see doctors serving people during some of their worst times in the emergency room,” she said. “The doctor I shadowed interacted with people from all kinds of backgrounds. He always did what was best for the patient.”

After graduating from Wright State in 2017, Hitchcock chose to attend the Boonshoft School of Medicine.

“When I interviewed here, I felt the most at home compared to other places I interviewed,” she said. “I had some wonderful opportunities and experiences during my undergraduate experience at Wright State.”