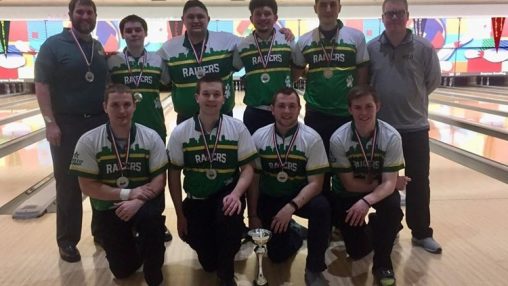 The Wright State Raiders proved something to themselves and the rest of the field at the 2018 National Collegiate Club Bowling Championships.

The men’s team posted their best-ever finish at the national event, placing second to William Paterson University – a team that clinched back-to-back titles – on April 8 in Smyrna, Tennessee.

“This was a huge step forward for our program,” Raiders coach Jeremy Fleck said. “Every year, we get ranked pretty high, but we don’t always perform when we need to. But this time, we showed that we were as good as any of the teams there.”

The balance of youth and experience paid off for the Raiders, who have three seniors, a junior and four underclassmen in their ranks. After a solid 24 games of pool play, fifth-seeded Wright State posted a 4-2 record in match play, good enough for second in their bracket, earning them a coveted bye.

The Raiders continued on the winning path, toppling Morehead State in the semifinals and bumping William Paterson into the contenders bracket. The eventual champions dispensed with Morehead State in the contenders bracket, setting up a rematch against the Raiders. This time, it was William Paterson that posted not one but two wins to take the title in the double-elimination tournament.

“Of course, we would have liked to have won,” Fleck said. “But this is the best team we’ve had in a while and, moving forward, I only see us getting better.”

Senior Michael McKee, a Kenton Ridge graduate, has seen the steady development of the team over his four years with the Raiders.

“It’s pretty awesome to see how much we’ve grown, how close we’ve become and how hard we work,” McKee said. “We have all the pieces in place for success next season.”

“We look really good,” he said. “We lose some good bowlers, but we have a couple of guys coming in as freshmen to fill those spots.

“And finishing second makes us want to work even harder next year.”

Qualifying to the Intercollegiate Team Championships is high on Fleming’s to-do list for next season. The Wright State men last qualified to the ITC nationals in 2012.

“I think we have a good shot,” Fleming said. “We want to make a name for ourselves and this was a step in that direction.”

WSU women: The Raiders led the field by more than 350 pins in the 24-game Baker qualifier but were upset by Bowling Green in five games and West Texas A&M in the contenders bracket to finished 5th. Coach Jeff Fleck, Jeremy’s dad, was named Club Coach of the Year, Tori Pappas was named club and tournament MVP. Raiders Colleen Hines, Leslie Campbell and Sarah Carpenter were named first team Club All-Americans.