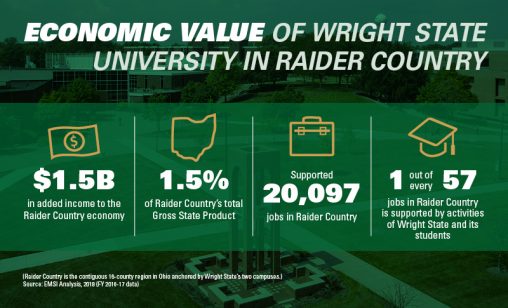 Wright State University adds $1.5 billion annually to the region’s economy and supports more than 20,000 jobs through its spending on operations and research and through spending by students, visitors and alumni, according to a new economic impact study.

The study, which analyzed data from fiscal 2016-17, was conducted by Emsi, a leading provider of economic impact studies and labor market data to educational institutions, workforce planners and regional developers around the world. The study was released during a news conference in Columbus on June 12.

The study concludes that Wright State benefits local businesses by increasing consumer spending in the region and supplying a steady flow of qualified, trained workers into the workforce.

“It enriches the lives of students by raising their lifetime earnings and helping them achieve their individual potential,” the study said. “It benefits state and local taxpayers through increased tax receipts across the state and a reduced demand for government-supported social services. Finally, it benefits society as a whole in Ohio by creating a more prosperous economy and generating a variety of savings through the improved lifestyles of students.”

The $1.5 billion in added income from Wright State equals about 1.5 percent of the gross regional product of Raider Country, or nearly twice as large as the region’s entire utility industry. And it supports one out of every 57 jobs in Raider Country, the 16 counties that include and surround Wright State’s two campuses: Allen, Aug­laize, Butler, Champaign, Clark, Clinton, Darke, Greene, Logan, Mercer, Miami, Montgomery, Preble, Shelby, Van Wert and Warren counties.

“Seeing that Wright State serves as a $1.5 billion economic engine really comes as no surprise,” said President Cheryl B. Schrader. “This study reinforces the fact that Wright State is a critical part of the economic health — the lifeblood — of the region and the state.”

Earlier this year, a separate economic impact study commissioned by the Southwestern Ohio Council for Higher Education (SOCHE) found that Wright State in FY2015-16 had more than a $1 billion annual economic impact on the Dayton region and supported 14,700 jobs.

The SOCHE study measured the impact of Wright State’s Dayton Campus in the Dayton Metropolitan Statistical Area, a region that includes Greene, Montgomery, Miami and Preble counties. It also measured the impact of the Lake Campus in Mercer County, which produced an economic impact of $39.9 million and supported the employment of 577 workers and $12.4 million in total wages.

The new Emsi study focused on fiscal 2016-17 and observed the university employed 3,337 full-time and part-time faculty and staff for its day-to-day operations. Of these, 93 percent lived in Raider Country. Payroll for those employees was $254.1 million, much of which was spent in the region for groceries, rent, dining out, clothing and other household expenses. In addition, the university spent $99.4 million to cover its day-to-day expenses for facilities, professional services and supplies.

Wright State added $331.7 million in income to the region as a result of its day-to-day operations from its payroll, the multiplier effects generated by the spending of the university and its employees and a downward adjustment to account for funding the university received from state and local sources. The $331.7 million in added income is equivalent to supporting 4,559 jobs.

Wright State spent $21.3 million on payroll to support research activities, creating a net total of $49.5 million in added income for the regional economy that was the equivalent of supporting 716 jobs.

Students paid for tuition, fees, books and supplies, and they took out loans that incurred interest. Additionally, students gave up money they would have otherwise earned had they been working instead of attending college. The total investment made by Wright State students amounted to a present value of $304.4 million, equal to $155.2 million in out-of-pocket expenses plus $149.3 million in forgone time and money.

The university’s reputation and activities attract students and visitors from outside Raider Country, whose expenditures benefit regional vendors. One in every four students attending Wright State originated from outside the region and some relocated to Raider Country to attend the school. The students would not have come to the region if the university did not exist, and a number of in-region students would have left the region for other educational opportunities, the study said.

While attending the university, the relocated and retained students spent $84.7 million to pay for groceries, rent, transportation and other things. A significant portion of the spending occurred in the region, generating $48.8 million in added income, which is the equivalent of supporting 1,035 jobs.

Thousands of visitors from outside the region came to Wright State to attend commencement, sporting events and other activities sponsored by the university. They spent money for lodging, food, transportation and other personal expenses. Their off-campus expenditures generated a net impact of $1.7 million in added income for the regional economy and was the equivalent of supporting 52 jobs.

The education and training Wright State provides for regional residents have the greatest economic impact, with thousands of former students employed in Raider Country.

Past and present students generated $1.1 billion in added income for the region, which is the equivalent of supporting 13,735 jobs. The added income includes the higher earnings that students and alumni earned during the year, the increased output of the businesses that employed them and the multiplier effects that occurred as students and their employers spent money at other businesses.

According to the study, Wright State generates more in tax revenue than it takes in, primarily from taxes that the state and local government collect from the added revenue created in the state.

Benefits to taxpayers also consist of the savings generated by the improved lifestyles of students and the proportionally reduced government expenditures on health care, law enforcement, unemployment benefits and other social services. These benefits will generate a present value of $50.9 million in savings to state and local taxpayers.

Total benefits to taxpayers equal $489.9 million, equal to the sum of the added taxes and public sector savings. That compares to taxpayer costs of $108 million — equal to the funding that Wright State received from the state and local government during 2016-17. This means that for every $1 of public money invested in Wright State, taxpayers receive a cumulative value of $4.50 over the course of the students’ working lives.