Wright State student Shaun Wenrick appointed to Board of Trustees 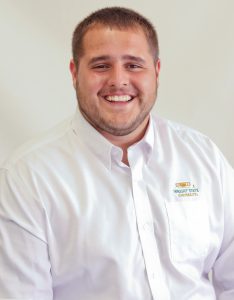 Ohio Gov. John Kasich has appointed Wright State senior Shaun Wenrick to the university’s Board of Trustees for a term beginning Aug. 10, 2018, and ending June 30, 2020.

Kasich also reappointed trustee Bruce Langos to the Board of Trustees. Langos’ new term runs from July 1, 2018, through June 30, 2027. He was first appointed to the board in June 2017 to complete the remainder of a vacant term.

Wenrick is pursuing a bachelor’s degree in early childhood education and a minor in business.

Since 2016, he has served as a resident assistant with Residence Life and Housing. In 2018–2019, he is serving as a head RA in the Parks Apartments. He previously served as an RA in Laurel and Pine Halls.

He is also a member of the College of Education and Human Services Dean’s Student Advisory Board.

He has participated in many community service projects, including Alternative Spring Break, Haunted Trail clearing and mission trips to Cambodia, Nashville, the Navajo Reservation in Arizona and Jackson and Sidney, Ohio.

He is the owner, head landscaper and designer of Wenrick Brothers Mowing and Landscaping, based in Sidney.