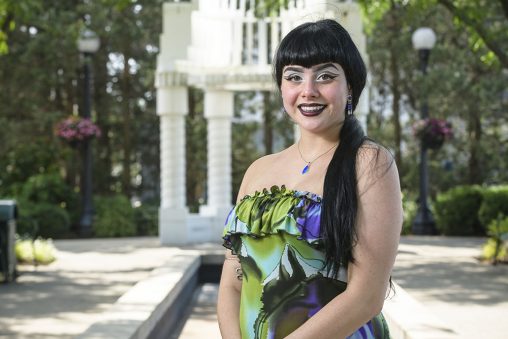 Paola Bellini received the first Erik C. Banks Memorial Scholarship, which was established in honor of the late professor of philosophy.
(Photo by Erin Pence)

Trying to comprehend existence and the meaning of life had become a personal odyssey for Paola Bellini. And when she took her first college philosophy class, everything came into sharper focus and her career path became clear.

“I noticed that a lot of the theories they were presenting were things I was kind of already dealing with in my head,” said Bellini, a philosophy major at Wright State University. “And I was really good at philosophy. I just loved it.”

Bellini was so good at it and showed such promise that she was awarded the first Erik C. Banks Memorial Scholarship, established in honor of the late professor of philosophy. Winning the $5,000 scholarship was an emotional thunderbolt for Bellini and her father, who had urged her to attend Wright State.

“I cannot tell you how it felt to see my father open the package with the scholarship and hand it to me with tears streaming down his cheeks with a pride only a father can feel for his daughter,” Bellini wrote in a thank-you note to the faculty in the Philosophy Program in the College of Liberal Arts.

Bellini’s father is a minister and professor at United Theological Seminary.

“Growing up, we kind of bounced around a lot to different churches he would pastor,” said Bellini. “I was kind of always involved with spirituality at a young age.”

She attended Graham High School in Urbana and then enrolled at Sinclair College, where she studied social sciences and liberal arts and took her first philosophy class. After earning her associate degree, she transferred to Wright State in 2017 and jumped into philosophy.

“I was enamored by the intricate design of creation. I feel like it professes God’s existence,” she said. “So I started to explore different philosophers.”

Bellini says her philosophy classes at Wright State have been challenging and feature robust philosophical discussions.

“The teachers are phenomenal. The curriculum is phenomenal. The books that they had us read in the courses have really expanded my philosophical knowledge,” she said. “Every day I would come home and realize I had found something new about myself.”

Bellini works in Wright State’s Office of Disability Services and last summer worked in the concession stands at RiverScape MetroPark. She says the Erik Banks scholarship money is big for her — taking some of the stress off of paying for college.

Banks grew up in New York City, the son of an architect father and mother who is an art historian and museum director. He attended Stuyvesant High School, a math and science public school. He earned his bachelor’s degree in philosophy at Bennington College and earned his Ph.D. in philosophy with a focus on logic and philosophy of science at the City University of New York. He joined the faculty at Wright State in 2006.

In 2014, Cambridge University Press published his book, “The Realistic Empiricism of Mach, James and Russell.”

In his book, Banks explored the ways in which the three philosophers can be connected and applies their ideas to the relation of sensations to brain processes.

“I am a naturalist philosopher; for me, philosophy without science is empty and science without philosophy is blind,” he said in an interview for a 2015 Newsroom article. “I think the job of philosophy should be to look at the whole historical-conceptual spectrum of ideas and ask: what are the possibilities? I hope to show that Realistic Empiricism is not only a historically significant view, it is also well worth considering today.”

Banks died Aug. 18, 2017, at age 47 after suffering a stroke. His family established the scholarship.

“I never met him, but I heard a lot of great things about him,” said Bellini. “I feel that this scholarship can help his legacy go on because it influences people a lot.”