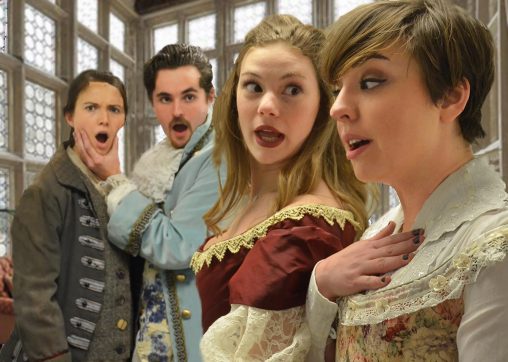 Wright State University Theatre’s production of the farcical comedy “The Liar” runs from Nov. 30 to Dec. 9 in the Herbst Theatre in the Creative Arts Center.

Wright State University Theatre presents the farcical comedy “The Liar” Nov. 30 to Dec. 9 in the Herbst Theatre in the Creative Arts Center.

Tickets are $15 for adults $10 for senior citizens and $5 for students. For tickets and theatre information, call the Box Office at 937-775-2500 from noon to 4 p.m. Monday to Friday or purchase single tickets online.

“The Liar,” originally by Pierre Corneille and first performed in 1644, was adapted by American playwright David Ives in 2010 for the Shakespeare Theatre Company in Washington, D.C. It won the Charles MacArthur Award for Outstanding New Play at the Helen Hayes Awards in Washington the following year.

The play focuses on Dorante, a wealthy young gentleman who after arriving in mid-17th-century Paris starts spinning tales of military action and romantic intrigue.

“The Liar” is directed by Josh McCabe (“The Memory of Water”). The set is designed by MacKenzie Perin, costumes by Taylor Dumas, lighting by Jera Lauderdale and sound design by James Dunlap. The dialect coach is Deborah Thomas and the fight director is Bruce Cromer.

On the stage, the production features Isaac Ingle as Dorante, Christine Fiala as Cliton, Kenneth Erard as Geronte, Lauren Kampman as Clarice, Caitlyn Shiner as Lucrece, Louie Kurtsman as Alcippe, George Heddleston as Philiste and Mallory Kraus as Isabelle and Sabine.

The Wright State Theatre season continues with “Mother Courage and Her Children” in the Festival Playhouse Feb. 7 to Feb. 17. The season also includes: