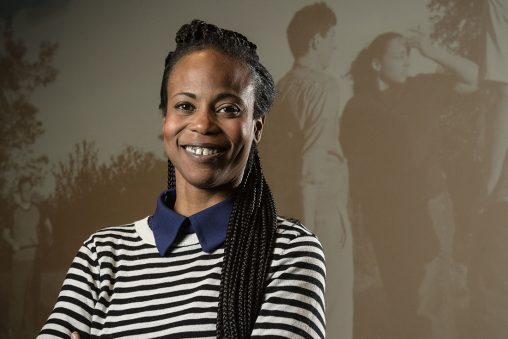 Hannah Beachler, who received a B.F.A. from Wright State in 2005. She won the Oscar in the Best Production Design category for her work on “Black Panther.” (Photos by Erin Pence)

A Wright State and Centerville graduate has made Oscar history.

Hannah Beachler, a 2005 Wright State University graduate, is the first African-American woman to win an Academy Award in the category for Best Production Design for her work in creating Wakanda in Marvel’s “Black Panther.” She won the Oscar along with Jay Hart for set decoration.

She was honored tonight during the live broadcast of the 91st annual Academy Awards.

“I stand here stronger than I was yesterday,” Beachler said during her acceptance speech.

“I give this strength to all of those who come next. To keep going and never give up, and when you think it’s impossible, just remember to say this piece of advice I got from a very wise woman: ‘I did my best, and my best is good enough.’”

In her speech, Beachler tearfully thanked her friend and mentor Carol Trevino, a Wilberforce resident and Wright State graduate who died in 2007 while working on the set of a movie in New Orleans.

A scholarship fund Beachler established for local film students in 2018 also is named in honor of the memory of Trevino.

Beachler and Hart won the Critics Choice Award in the Best Production Design on Jan. 13.

Beachler and Ruth E. Carter (costume design) both were honored for their work on “Black Panther.” They became the first African-American women to win Oscars in their categories, and the first to win in a non-acting category since Irene Cara in 1984, who won for best original song, “Flashdance…What A Feeling,” which she co-wrote.