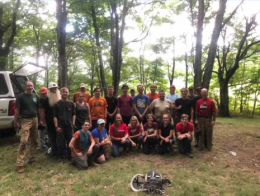 Wednesday marked the return of the students from Wright State University to the highlands of Carter County. For 20 straight years the students have been coming south to perform trail maintenance on the Appalachian Trail.

The students have worked with various groups throughout the years to find the parts of the trail where their labor can do the most good.

This year, the students joined forces with the Southern Appalachian Work Center and the work center’s partner, the Mount Rogers Outfitters. As SAWD spokesman Jim Chambers said in his briefings on the day’s activities, they “ensured that all trails in the Roan High Country are on the way to long-term preservation.”

Chambers said the anniversary day began with a “robust” climb of more than 2,500 feet in elevation to Hump Mountain “with an extreme amount of gear to ensure that our mission was accomplished.”

This year, the students worked on the section of trail between Doll Flats and Hump Mountain.

“As a result of this event, there will be additional attention to trail preservation in this region … as well as use management possibilities north of Hump Mountain,” Chambers said.

Chambers said Wright State’s work has been supported by other trail maintenance groups as the Southern Appalachian Work Center has grown. He said that is especially true for support organizations like the Tennessee Eastman Hiking and Canoeing Club and the Appalachian Long Distance Hiking Association.

View the original story at johnsoncitypress.com