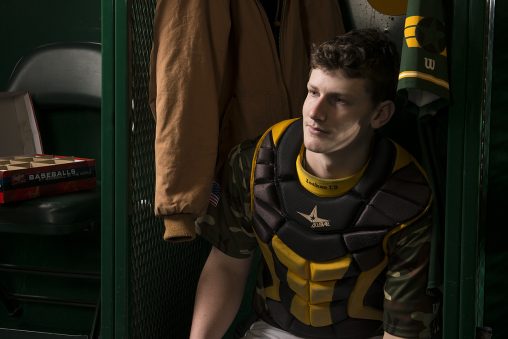 Former Wright State baseball player Sean Murphy hit a home run in his Major League debut for the Oakland Athletics Sept. 4. Murphy was called up on Aug. 31 but saw his first game action in Wednesday night’s 5-0 win against the Los Angeles Angels.

Murphy joined the Wright State baseball team in 2014 as a preferred walk on and quickly blossomed into the team’s starting catcher. He was one of the nation’s top catching prospects heading into the 2016 MLB draft.

After being selected 83rd overall that year, Murphy continued to excel defensively and improve offensively throughout the next three years. Heading into the 2019 season, Murphy was ranked as the third-best catching prospect in all of baseball.

Murphy struck out in his first Major League at bat, but during his next plate appearance, he took Angels pitcher Jake Jewell deep over the right center field fence for his first career hit, a home run, and RBI. Murphy finished 1-3 in the game after he grounded out to third in the bottom of the seventh.

Murphy’s reputation as a defensive wizard behind the plate proved to be beneficial to the Athletics, as not one single Angels player attempted to steal a base.

“Hit a homer, catch a shutout, not a bad start,” Melvin said. “He looked like he got more and more comfortable as the game went along. I think he’ll tell you he’s just as proud of the shutout as he is the homer.”

For the remainder of the season, Murphy will compete with Chris Herrmann and Josh Phegley for playing time behind the plate as the Athletics make the push for a playoff spot. The A’s are tied with the Cleveland Indians for the final playoff spot in the American League.