Raiders to face Notre Dame in NCAA first round 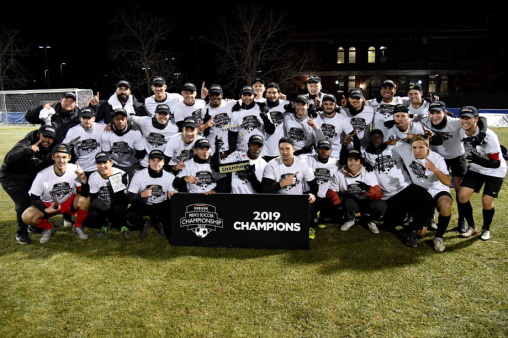 Fresh off its first Horizon League Championship in program history, the Wright State University men’s soccer team found out its first round opponent in the NCAA championship on Monday afternoon as the bracket was unveiled. The Raiders will take on Notre Dame out of the Atlantic Coast Conference on Thursday, Nov. 21, at 7 p.m. in South Bend.

The Raiders are coming off of a penalty kick shootout victory over Milwaukee on Saturday night, as Jackson Dietrich’s penalty kick score sent Wright State into its first NCAA championship and etched his name into the history books.

“It’s a great feeling for the guys to see our name up there. (Saturday night) was a roller coaster ride. Every game has a lot of emotions, but that was a deserved result for us and couldn’t have happened to a better player in Jackson to finish it off for us,” Raider head coach Jake Slemker said.

“We’ve been close the last couple years, so to finally see our name up there was well deserved, overdue and great to see,” added Dietrich. “Notre Dame is a big school but we are confident in our own ability and we’re not worried about who we are playing but are just worried about us. We can beat anybody, so we are looking forward to it.”

Wright State enters the NCAA championship with a 10–8–3 overall record, while Notre Dame holds a 10–7–1 mark. The Raiders tallied a 6–4–1 record away from home this season, while the Fighting Irish were 7–3 on their home pitch.

The Raiders are one of four teams making their NCAA championship debuts, joining Iona, Marshall and NJIT, while after 54 years Pittsburgh is back in the tournament for its first appearance since 1965.

The 48-team field is made up of champions from 24 conferences, who qualified automatically, in addition to 24 teams that were selected at-large. The top 16 teams were seeded and receive first round byes. All first round games will be played Thursday, Nov. 21, on campus sites, while all second round action will take place Sunday, Nov. 24. The third round will be played Nov. 30 and Dec. 1, while the quarterfinals will be played Dec. 6 and 7.

ESPNU will provide live coverage of all three games at the College Cup on Dec. 13 and 15 at Sahlen’s Stadium at WakeMed Soccer Park in Cary, North Carolina.