Pulitzer Prize finalist ‘The Wolves’ up next for Wright State Theatre 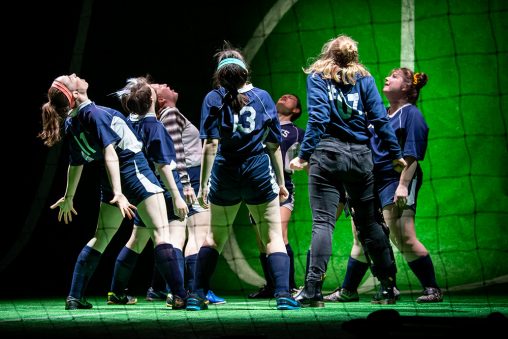 Wright State Theatre’s production of “The Wolves,” the story of a teenage girls’ soccer team and how disparate personalities bond to form a team, runs Feb. 6–16 in the Festival Playhouse. (Photos by Erin Pence)

Wright State University Theatre continues its season in the Festival Playhouse with the regional premiere of “The Wolves” Feb. 6–16.

“The Wolves” contains adult language and subject matter and is not recommended for children.

By Sarah DeLappe, “The Wolves” premiered Off-Broadway in 2016 and was a finalist for the 2017 Pulitzer Prize for Drama.

The drama tells the story of the Wolves, a teenage girls’ soccer team, and how disparate personalities bond to form a team. As they warm up for a succession of games, the teammates talk nonstop about life and the politics of their personal lives as well as the larger world. They gossip about war, menstrual products, genocide, sports, pop culture and their relationships and bond over a bag of orange slices and personal traumas.

To prepare for the production, the cast trained with the Wright State soccer staff.

“The Wolves” is directed by Marya Spring-Cordes (“The Curious Incident of the Dog in the Night-Time,” “Grapes of Wrath,” “Grand Hotel”). Sets are designed by Carleigh Siebert, lighting by Matthew P. Benjamin and Gabe Reichert, costumes by Victoria Gifford and sound by James Dunlap.

“The Wolves” is part of “RISING: Women in American Culture since Suffrage,” a series of arts and research events organized by Wright State’s CELIA (Collaborative Education, Leadership, and Innovation in the Arts) to commemorate the 100th anniversary of the 19th Amendment.

Wright State Theatre’s 2019–20 season continues with “An Enemy of the People” from Feb. 21 to March 1 in the Herbst Theatre and “Mamma Mia!” from March 19 to April 12 in the Festival Playhouse. View the schedule online.