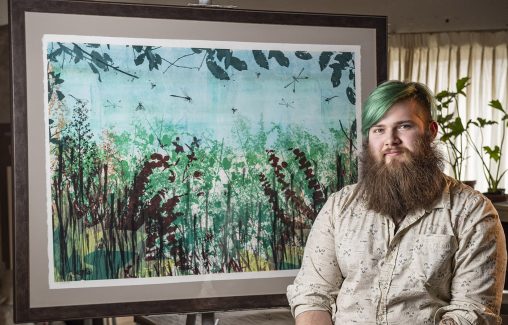 “A Clearing Ahead” by William Worley, a senior majoring in printmaking, is one of two works by Wright State students available in the silent auction at ArtsGala on March 28. (Photos by Erin Pence)

You can support Wright State University fine and performing art students and acquire a stunning piece of art at ArtsGala. The university’s annual arts event will feature two works by Wright State fine art students available as part of the popular silent auction.

“A Clearing Ahead” is a one-of-a-kind screen print by William Worley, a senior majoring in printmaking.

“Mist Bowl” is a stunning digital archive print by Eric Denlinger, a senior majoring in photography and printmaking.

The works were selected for the auction by the ArtsGala Host Committee in the annual ArtsGala student art competition.

Over the last two decades ArtsGala has raised nearly $3 million in scholarships for fine and performing arts students. Patrons are treated to live performances by students in dance, opera, classical music, jazz and the best of Broadway as well as demonstrations from motion pictures and visual arts students. The night also includes themed dining rooms, a beer garden, speakeasy and the silent auction.

The auction includes artwork, luxury gift baskets, fine dining certificates, wine, cigars and entertainment packages. Patrons can bid online — on a cellphone, tablet or computer — or in person at ArtsGala. Information about participating in the auction online is available on the ArtsGala website.

Worley’s “A Clearing Ahead” is a 50-inch by 38-inch screen print that he created for the ArtsGala competition. His idea for a “screen print behaving differently” resulted in a one-of-a-kind work. He created the piece with small screens of real plants that he layered hundreds of times — a process that took about eight hours.

“It looks like you’re sitting under a tree, you’re in tall grass, around some plants,” he said. “It reminded me of being in a field or on the edge of some trees with a clearing right up ahead.” 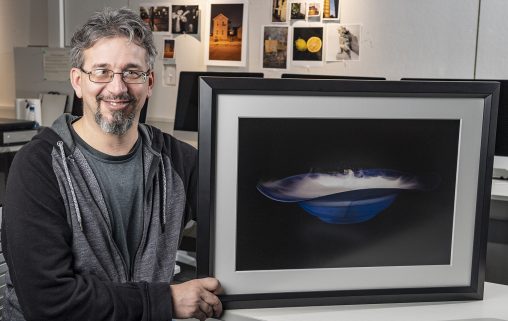 “Mist Bowl” by Eric Denlinger, a senior majoring in photography and printmaking, is available in the silent auction at ArtsGala on March 28.

Denlinger created “Mist Bowl” for his final assignment in a studio lighting class. It features a table centerpiece from his home set on a black background filled with misty tendrils reaching out of the bowl. His goal, he said, was to light the bowl in a way that “draws the viewer to the mist.”

Denlinger likes the way he can use lighting to capture the flow of smoke and mist in a photo. “I’ve shot stuff with smoke and mist before and I really enjoyed doing that so I thought I’d take that idea and do it in the studio,” he said.

Worley is passionate about printmaking, something he was first exposed to as a student at Stivers School for the Arts. When he was 18, he joined the Dayton Printmakers Cooperative and immediately became its most active member. He loves the challenge of creating a print and the way the process allows for experimentation while also honoring centuries of tradition.

Worley has been interested in music his whole life and plays a variety of instruments. On top of that, he began drawing at the age of 9 or 10. After successfully auditioning at Stivers School for the Arts, however, he became more interested in pursuing visual art and “art won over music.”

“Art was calming, made sense,” he said. “It was something that I was excited about.”

As an art student at Wright State, Worley has taken advantage of opportunities to work in other mediums, including painting and photography. The Department of Art and Art History exposed him to other experiences and processes he had not pursued in the past, he said.

“It’s the professors themselves who have gotten me to think a little bit more about what I’m doing and to work harder and become a better version of myself,” Worley said.

After he graduates in December, Worley plans to pursue a master’s degree in library sciences and eventually work in the art librarianship field. It’s a career that would allow him to keep creating and while being surrounded by art.

“I can study printmaking and prints for the rest of my life,” he said.

Denlinger has been taking photographs for close to 45 years, beginning when he was in junior high in Beavercreek. He got his love for photography from his father, who takes photos as a hobby.

Denlinger likes to photograph abstract subjects and dabbles in “a little bit of everything,” from landscapes to portraitures.

After graduating from Beavercreek High School, Denlinger went to Sinclair Community College before taking a break from school to join the U.S. Navy, where he served for seven years as an administration clerk.

He was initially stationed in Norfolk, Virginia, serving on a small guided missile cruiser. He then served on an aircraft carrier in the Mediterranean, where he visited Italy, Spain and Greece — and “took a lot of pictures.” Finally, he did shore duty at Naval Air Station Jacksonville in Florida for two years.

After he left the Navy, he returned to Beavercreek and enrolled at Wright State in 2015. He initially thought he would major in business but then decided to finish what he started and switched to fine arts.

Through the Wright State art program, Denlinger has been able to learn new techniques, including studio lighting and printmaking.

Denlinger participated in ArtsGala in 2019, demonstrating how to combine photography with printmaking by showing how to “combine the two techniques to create a new image.”

Denlinger is scheduled to graduate in May. He would like to take photos for publications and show his work in galleries. His dream is to combine his photography skills with his love for music and take photos of bands and create album art.