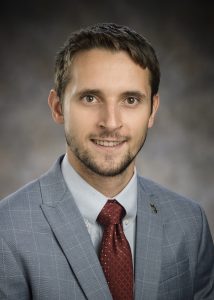 Ivan Mallett, president of Wright State University’s Student Government Association, pursued the position with high hopes for what he and his team could accomplish. Mallett, who is an international studies major, has already earned the respect of many of his classmates, but he continues to fight for Wright State students.

“A big part of my position is listening to what people have to say,” he said. “I want to listen to people’s perspectives and ideas to make the best decisions possible for Wright State students.”

Originally from Russia, Mallett was adopted at the age of 3 and brought to the United States. His adoptive mother was a single parent who raised Mallett and his sister, who was also adopted.

A graduate of Springboro High School, Mallett enrolled at Wright State because he appreciated the simplicity of registering for classes at Wright State.

“Wright State was one of the easiest places for me to apply to,” he said. “I was able to get everything done and register for classes within a month of the semester starting, which really helped since I just got back from basic training.”

Mallett serves in the Army National Guard as an intelligence analyst, holding the rank of sergeant. He values the experience the Army has given him in when it comes to his role as student body president.

“The military has taught me to always place the needs of other people above my own. As a sergeant I have soldiers where I am the first person in their chain of command, so any issues that come up, it’s my responsibility to take care of them. I truly believe that a team is more effective if all members of the team believe that their leadership cares for them as individuals,” he said. “But that also transfers into the public service aspect of this as well. I try to always make myself available to any student that has an issue or a concern, and it doesn’t matter how busy I am in a day, I will make time to listen to any suggestion or concern a student has.”

This experience would serve Mallett well when he first got involved with Wright State SGA. As an associate justice in 2017, he was responsible for lobbying for Wright State students. Mallett advocated for a tax-exempt textbooks bill with the Ohio Legislature. After that experience, Mallett decided to run for SGA president.

In order to participate in Student Government elections, students must attend candidate meetings and get their name on the ballot. To run for president or vice president, candidates need to collect 300 student signatures endorsing them for the position.

Mallett said the process was tough, but it was rewarding to see the work pay off when he was elected.

“One thing I enjoyed about it was having the opportunity to have my friends and colleagues vote me in,” he said. “Having a group of people who not only trust me but allow me to work for them on their behalf is truly rewarding.”

As president of the student body, Mallett is proud of his efforts to help implement a mental health week on campus after the tragic Dayton shooting last August. He hopes it provides a way for students to talk about things that are troubling to them.

“Tragic events like the Dayton shooting take a toll on you,” he said. “It made me want to put an emphasis on mental health at Wright State, especially with all the stresses students already face.”