DDN: Tom Hanks once took something from Dawne Dewey — or did he? 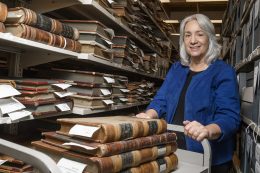 Dawne Dewey has been safeguarding our history for decades.

She’s the head of Special Collections & Archives at Wright State University, home to the largest Wright Brothers Collection in the world as well as millions of records, documents and photographs.

On the eve of her retirement, Dewey offers an inspiring perspective on the region’s history.

“The one thing that has always struck me about Dayton’s history is that ordinary people, going about their lives, did some pretty extraordinary things.”

How long have you been the head of Special Collections & Archives at Wright State University? How did you become interested in this field?

I started working at WSU in April of 1989. I became the head of the Archives in 1997. I will wrap up 31 years of service at the end of May. I grew up loving history. When I went to college, History and Anthropology were my chosen subjects. I was lucky enough to find the graduate program in Public History at WSU and a career in museums and archives.

If you had to choose one object in the collection you are most fascinated by, what would it be and why?

That is a tough question. I like it all! There is one very special small autograph album in the Wright Brothers Collection that belonged to the Wright Brothers’ younger sister, Katharine. It is full of handwritten notes from her classmates and dates to 1882.

There is one entry in particular that has always spoken to me. “May your life be as you wish it. May you wish it as it is.” This a good reminder for me right now as I retire. Change is always challenging and sometimes scary, but being satisfied with life as it is, in that moment, is a gift.

What would you want people to know about the history of the Dayton region?

Dayton has a remarkable history. It is the story of people who overcame adversity, people who were imaginative, creative, inventive and resilient. There are so many examples or stories of individuals, families and groups who stepped up to challenges and found solutions to problems. You might say, well every city has that, and I suppose they do. The one thing that has always struck me about Dayton’s history is that ordinary people, going about their lives, did some pretty extraordinary things. The Wright Brothers became world-famous when they showed the world what an airplane could do. But they were also hometown boys who walked the streets of Dayton, rode the streetcars, went for bicycle rides, played with their nephews and nieces, and just called Dayton their hometown. The ordinary people are the ones who do extraordinary things. We all have that potential in one way or another.

During your time at Wright State, who were some of the well-known people you enjoyed meeting?

Tom Hanks — “Call me Tom.” And when he leaned in to say goodbye at the end of his visit, he said “I took something from the archives and you have to figure out what it is.”

Erik Lindbergh — During Erik’s visit to the archives, he said “You just get to live in this history! It’s extraordinary!”

View the entire story at daytondailynews.com