Police Officer Billy Thomas was named the 2020 Wright State University Officer of the Year. Lt. Kurt Holden, interim director of public safety, presented Thomas with the award during a small ceremony near Alumni Tower on March 10.

“It was a shock, I wasn’t expecting it,” said Thomas. “I’m very surprised and honored.”

“Officer Thomas has really stepped up this year,” Holden said. “Billy was very determined to not allow the quality of services diminish in 2020.”

Thomas serves in the field-training program to help train staff. He became an officer in charge to help support the supervision team and volunteered to help the dispatch team through staffing shortages. 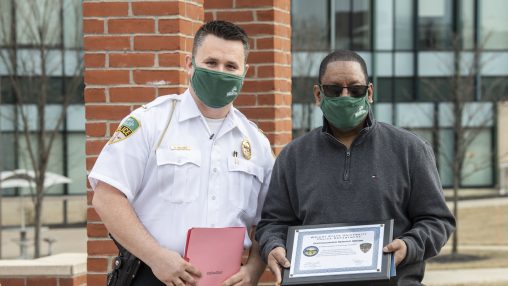 During the ceremony, Holden also recognized dispatchers Earl Thompson and Whitney White with Distinguished Service Awards for their excellent service during difficult times.

“You talk to us but you don’t see us,” said Thompson. “You see the officers and not necessarily us and so it’s nice to be acknowledged.” 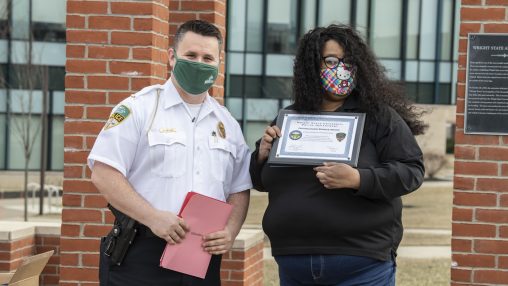 Holden says that all three recipients are incredible employees and were heavily relied upon during the pandemic.

“Our officers and dispatchers here are required to report every single day,” said Holden. “Their commitment to Wright State is second to none.