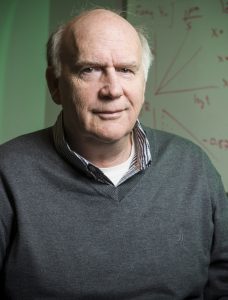 Allen G. Hunt, Ph.D., professor of physics in the College of Science and Mathematics, is the recipient of the 2020–2021 University Professor Award.

Since joining the Wright State faculty in 2004, Hunt has excelled in his research, teaching and service activities.

His research in physics, geosciences, geochemistry, geobiology and soils has profound environmental implications for the study of erosion, land forms, global water cycle, net primary productivity of vegetation and the carbon cycle, and agricultural restoration.

Hunt has used complexity-based research strategies that decades later have begun to be recognized as one of the most important techniques to solve some of the most difficult and pressing problems at the overlap of geochemistry, ecology and hydrology.

His research papers have produced findings in everything from El Nino events and global temperatures to soil erosion and the African Ebola epidemic.

Hunt’s innovative research has resulted in an impressive number of peer-reviewed publications in prestigious journals such as Nature, Bulletin of Meteorological Society and Reviews of Geophysics; over 4,900 citations in Google Scholar; and numerous invited national and international presentations.

Hunt has also excelled in his teaching and mentoring activities. His sustained teaching efforts were recognized in the laudable comments, evaluations and in a “Who’s Who Among American Teachers” nomination from his students.

Behzad Ghanbarian, a former student of Hunt’s who is now a professor of geosciences at Kansas State University, received the 2015 Turcotte Award for his dissertation-related research from Nonlinear Geophysics, American Geophysical Union. Ghanbarian also received last year’s Early Career Award in Soil Physics and Hydrology from the Soil Science Society of America.