“It’s a pretty amazing thing for some students,” said Jeremy Bolden, instructor of motion picture production. “It’s pretty amazing for anybody really to work on a commercial that airs nationally.”

The commercial aired on Nov. 11 at 8:15 a.m. during “Operation Hidden Treasures” on the Discovery Channel. The show follows U.S. military veterans as they find and repurpose unused items for people in need. 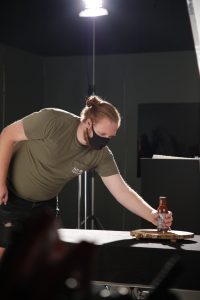 The commercial was produced in collaboration with the New Media Incubator at Wright State. The students only had four days to produce the commercial and send it to the Discovery Channel.

The time crunch wasn’t a problem for the production crew, said Bolden. “The students just went to work,” he said.

On the first day, the students finalized the script. On the second day, they recorded the voiceover. On the third day, they shot the footage, and finally, on the fourth day, they completed the editing.

“It was a pretty amazing thing to see,” said Bolden.

“It was such a great learning experience, and we all had so much fun doing,” said Watts, who was the cinematographer on the project and plans to pursue a career in television and film production. “It was such a big team effort, and it’s something I will take with me for the rest of my life.”

Bolden said this was an invaluable experience for his students, and the four-day project is something they will be able to share with millions of viewers.

“The amount of eyeballs that are going to be on it is the most crazy part,” said Bolden.

“This opportunity just opened my eyes and showed me how much I love this job and how much fun I could have doing it,” said Watts.