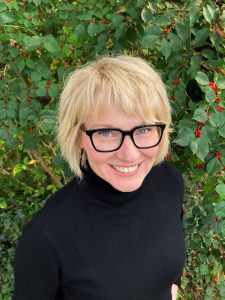 Erin Flanagan is professor of English language and literatures and the author of “Deer Season.”

“Deer Season,” the debut novel by Erin Flanagan, Ph.D., professor of English language and literatures at Wright State University, has been nominated for an Edgar Allan Poe Award for Best First Novel by an American Author.

Flanagan was one of five authors nominated in the category.

The prestigious Edgar Allan Poe Awards celebrate the best mystery fiction, nonfiction and television published or produced each year. The awards are judged by volunteer committees of professional writers and are presented by the Mystery Writers of America, the premier organization for writers and fans of the mystery and crime genre.

Flanagan will join other nominees at the 76th annual Edgard Awards ceremony on April 28 in New York City.

“I was gobsmacked to get the nomination!” she said. “I’ve followed the Edgars for a long time and never dreamed I’d make their list.”

Flanagan did not know about the nomination until all of the Edgar nominees were announced.

“I was actually napping and woke up to a text from a friend congratulating me and was like, what?” she said. “The lesson here is to take more naps.”

“Deer Season” was released on Sept. 1 by the University of Nebraska Press. It has earned a 4.9 rating (out of 5) from readers on Amazon and a 4.2 rating on Good Reads.

Publishers Weekly gave “Deer Season” a coveted starred review and described it as a “standout novel of small-town life, powered by the characters’ consequential determination to protect their loved ones at any cost.”

In “Deer Season,” Flanagan examines what happens in a small town when tragedy strikes and whether the town’s residents would protect each other or turn on their own. 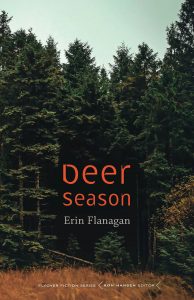 Flanagan grew up in a small town similar to where “Deer Season” takes place. “It was one of those places where everyone knows everyone else’s business and was a safe place to grow up,” she said.

Flanagan has released two collections of her short stories: “It’s Not Going to Kill You, and Other Stories” in 2013 and “The Usual Mistakes” in 2005. In August, she will release her second novel, “Blackout.”

Her stories have appeared in The Missouri Review, Colorado Review, The Southern Review and Prairie Schooner, and she has held fellowships with Yaddo, The MacDowell Colony, UCross, and the Bread Loaf and Sewanee Writers’ Conferences.

She received her bachelor’s and master’s degrees in English and her Ph.D. in English with a specialization in creative writing from the University of Nebraska at Lincoln.