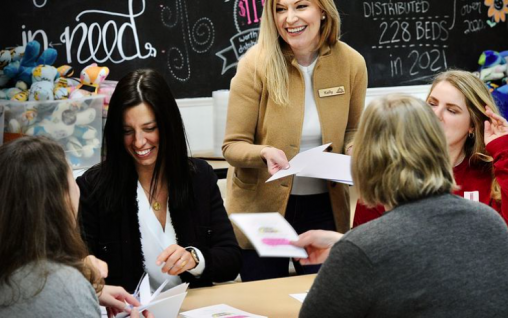 Kelly Kimpton (center), who graduated from Wright State in 2011 with both a bachelor’s in history as well as a bachelor’s in political science, gives back to the community through several volunteer organizations.

Every contribution of time or money helps, Kelly Kempton said.

“Everybody has something to give,” she said. “There are so many wonderful organizations in the Dayton area, there’s going to be something that resonates for you.”

Kempton has found several, including some she was introduced to through her involvement in the Junior League of Dayton. The group, which she joined 10 years ago, gives members the chance to learn how to be good volunteers and to find other groups with which they have a connection, she said.

“I liked the idea of having experiences throughout the community,” said Kempton, who is currently vice president of the Junior League’s community council.

In that role, the Oakwood woman is charged with helping Junior League members find volunteer opportunities through its community partners. Although that proved more challenging during the pandemic, they were able to continue their focus on literacy by creating and distributing literacy kits and through other programs with various organizations.

Through the Junior League she was introduced to Hannah’s Treasure Chest, a nonprofit in Centerville that provides needed items to children throughout southwest Ohio. Her volunteer work there led to a job as the development manager.

“When you drop in and see what we do, you can’t help but fall in love with the mission,” she said.

It was also with the Junior League that Kempton first did a shift with Helping Hands of Dayton, where she is now a board member. The nonprofit creates care packages with travel-size toiletries and meal cards to help families get through the first 12 hours of their child’s critical-care hospital stay.

“Let’s face it, you don’t want to leave your child during that time,” said Kempton, whose own daughters – 5-year-old twins Elizabeth and Charlotte – spent time in the newborn intensive care unit after they were born premature.

Kempton was a regular volunteer at Dayton Children’s Hospital even before her daughters were born, but she is now on the hospital’s Women’s Board and co-chair of the arrangements committee. The premier biennial fundraiser to support the hospital, the CHA|CHA gala, will be on May 6 after being postponed from last year and hopes to raise $1 million, she said.

Kempton has “a very giving spirit” and is an advocate for children, said Missy Mae Walters, who got to know Kempton through the Junior League and nominated her as a Dayton Daily News Community Gem.

“She wouldn’t know how to function if she wasn’t volunteering or helping someone,” said Walters, of Kettering.

Kempton often holds personal ties to the organizations she is involved with, but she also points to the support of her husband, Jeffrey. Her work is her passion.

“It’s all just very dear to my heart,” she said.