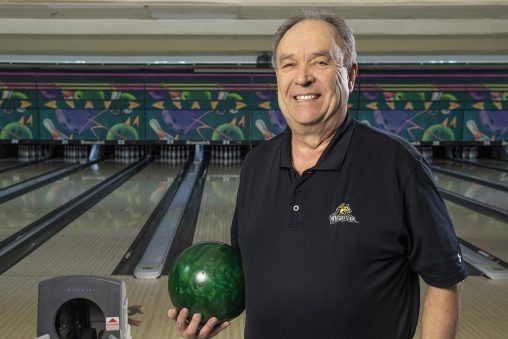 Longtime Wright State bowling coach Jeff Fleck will be inducted into the Ohio Bowling Hall of Fame as a Friend of Ohio Bowling. Fleck was also named the head coach of Wright State’s new Division I women’s bowling team.

As a longtime bowler, Jeff Fleck has had much success knocking down pins, but his latest accomplishment is sweeter than any strike.

The longtime Wright State University bowling coach — and co-founder of the nationally recognized club bowling program — will be inducted into the Ohio Bowling Hall of Fame at a banquet in Columbus on May 21.

Fleck will be inducted in the category of Friend of Ohio Bowling, along with 10 others who’ve had success or made contributions to the sport in the state.

“I’ve been on Cloud Nine since I found out at the end of February,” Fleck said of the honor. “To be in a hall of fame at the state level is pretty rewarding. Everybody’s been congratulating me.”

“Everybody” includes many of the Wright State students who bowled under his leadership, beginning when he co-founded the club program in 2005. The program is operated as a club sport – the student-athletes aren’t on scholarship and instead pay a fee to compete.

Each team has eight bowlers, five of whom bowl at a time at tournaments, with the other three as substitutes.

“We’ve competed in tournaments in Illinois, Michigan, Tennessee and Indiana. We compete against all types of schools,” Fleck said.

The teams’ season runs from late September through April. Practices are held two or three times a week at one of two facilities, one in Kettering and one in Beavercreek.

Fleck, his fellow coaches and the student-athletes have a history of success. He said the program is in the top 25 in the country. The women’s team won the National Collegiate Club Championship in 2015 and 2019 and were runners-up in 2014 and 2016. The men’s club bowling team won its first national championship earlier in April in Iowa.

Fleck’s role will change in the new academic year. Wright State is adding women’s bowling as an NCAA Division I team, which Fleck will coach. The women’s club bowling teams will be eliminated.

“I am so excited to be chosen as the coach of the new NCAA women’s bowling program,” Fleck said. “I relish the opportunity to take our very successful club program to the next level.”

Fleck was born in Fayetteville, North Carolina, where his father was stationed in the Air Force. The family moved several times before settling in Ohio in 1968.

He started bowling when he was 10.

“My parents would take me bowling. I was pretty good at it right away,” Fleck recalled. “I bowled successfully, winning city and state titles.”

His love of the sport and his string of successes are at the core of his coaching philosophy.

“Bowling has been good to me, and I feel like I’m giving back by helping coach and teach and train and provide information that I was fortunate to get from those who helped me,” he said.

He relishes the team aspect of bowling, especially how it teaches communication, leadership, and community.

“I love the chemistry, the cheering, and the focus on the positive. I like that atmosphere,” he said.

He tells recruits that by coming to Wright State they’ll get not only a degree in their major, “they’ll also get minors in bowling and life skills.”