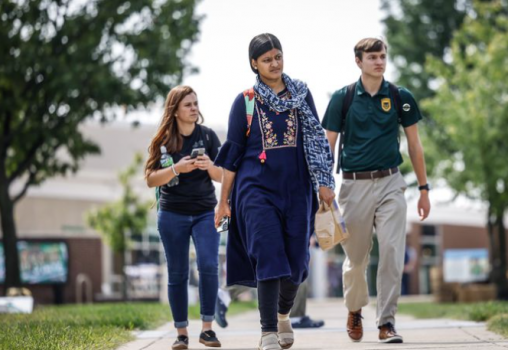 Central State University is a big winner in a $17.7 million, three-year investment that Intel is making to train the workforce the semiconductor company needs as they break ground on a new factory in Licking County.

Central State is one of seven universities leading the first phase of a $50 million project to train the highly skilled workforce Intel needs for its Licking County factory, which is expected to begin manufacturing semiconductors in 2025, according to the Associated Press. Semiconductors are used in a variety of technologies, including computers, advanced medical devices, military devices and televisions.

Central State is expected to get about $1.3 million to lead the project, according to Debbie Alberico, the interim director of public relations at CSU. Its project is focused on creating a diverse workforce and first-year engineers for Intel.

Jack Thomas, president of Central State University, said the university is “excited to work with Intel as a higher educational partner to create a diversified workforce that represents the full spectrum of the United States.”

Intel has pledged $50 million over the next decade to invest in Ohio colleges and universities, half of a $100 million pledge total. The other half of the money will come from the National Science Foundation. Intel said it expects this first phase of the project to produce nearly 9,000 graduates for the industry and provide more than 2,300 scholarships over a three-year period.

Other local colleges will benefit, too. Wright State will collaborate with Central State University to help it build a semiconductor educational program and a microelectronics lab and provide experiential learning opportunities for students, WSU said. WSU will get $40,000 for the first year of the project, and the other two years are contingent on performance.

WSU is one of four southwest Ohio universities working on building a workforce training program and knowledge base for the semiconductor industry. The alliance is led by the University of Cincinnati.

Wright State spokesman Seth Bauguess said WSU will get $210,000 for the first year of the UC-lead grant, with the next two years of funding contingent upon performance.

“The grants will provide us with resources needed to fine-tune our curriculum to meet the needs of Ohio’s growing semiconductor industry,” said Ivan Medvedev, WSU associate professor and interim chair of the Department of Physics.

Wilberforce University, located across the street from Central State and the only other historically black college in Ohio, is working with Kent State University and other northeastern Ohio institutions to expand programs for technicians, entry-level engineers and advanced degrees in manufacturing.

Christy Pambianchi, chief people officer at Intel, said at the groundbreaking the goal of this investment is to create a diverse workforce with home-grown talent for the Intel factory.

“I’m so proud to move forward with these initiatives between government, industry and academia so that we can solve the high-tech workforce challenge, create high-paying jobs in the United States and close the technology skills gap by empowering a diverse generation of skilled workers who can help us continue to innovate and grow,” Pambianchi said.