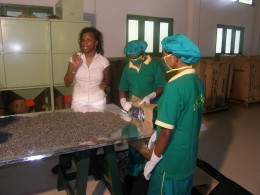 Monaqui Porter-Young during her visit to the Paradise green tea farm in Sri Lanka.

Wright State alumna Monaqui Porter-Young is an enthusiastic woman. Get her talking about her company and her products, especially Srina organic green tea, and she becomes a bubbling fount of information on tea farming, equal trade and sustainable farming.

Porter-Young is the luncheon speaker for the 2011 Honors Institute Symposium. Her presentation is entitled “My Journey: from Wright State University to Sri Lanka.”

Porter-Young’s journey began when she visited Paradise farm, an organic agricultural site in the midst of the Sri Lanka’s rainforest. She found that the bounty of Sri Lanka’s natural resources contrasted sharply with the poverty in which the farmers lived.

“People of color and poverty were not strange to me,” says Porter-Young, an African American woman who grew up in a small Midwestern town. But she was perplexed by this situation. “How could you have such an abundance of resources and have such poverty?”

This was the foundation of the business that Porter-Young began after her stay in Sri Lanka. She began to talk with the farmers about sustainable development through equal trade. Srina organic green tea was born.

“There was no blueprint,” says Porter-Young. At the time, she didn’t know there was a green movement, or a shift towards sustainable business. She says that she just looked around at the resources Sri Lanka possessed and asked herself how they could be used. “Use what you got!” she stresses.

All of this may seem strange for someone who graduated from Wright State’s famed theatre program, but Porter-Young says that her creative background as an actress has helped her hugely. She says that being a creative entrepreneur allows you to be resourceful, and to save a ton of capital on advertising, and she thinks many people underestimate artists’ abilities to run a business. But “we have the benefit of our own creativity to fall back on,” she says.

Porter-Young is the poster child for creative business strategy. She started Srina with less than $100 in capital. The company didn’t have enough money to purchase tea bags, so the farmers boiled banana leaves and made them into baskets to put the tea in.

“We never had to go off the farm for anything,” says Porter-Young.

Since its inception, Srina has expanded from two flavors of tea to over 20 varieties, including herbal teas designed to help people with diabetes, cognitive disorders, high blood pressure and weight loss. It is still available as loose-leaf tea, but now Srina tea can also be purchased in micro‐filter, biodegradable tea bags made with cornstarch fibers.

“I think [sustainability is] a lot simpler than we make it,” says Porter-Young. “Some companies spend a lot of money to educate people about sustainability when there are lots of simple things we can do.”

Porter-Young’s business enterprise has grown to encompass more than just tea. She is the CEO of MP Global Connect, Inc., an import distributor that also provides nutritional health and educational information, as well as advising other companies on sustainable business practices. Porter-Young says that many of her clients are Fortune 500 companies looking to improve their green business strategies. “There’s a lot of money spent on things that take less capital but more action,” she says.

Action is not a problem for Porter-Young. It seems that since her graduation, she hasn’t sat still.

“Whenever I do demos or I do lectures,” she says, joking about her unconventional career path, “the first question is always ‘how does Ohio, actress, Sri Lanka, tea…can you connect the dots for me?”

She says students at Wright State should take advantage of everything that is offered here, not just the courses in their major, or the ones that will fulfill their requirements. She says the key is to graduate well rounded.

Porter-Young is an example of what creativity and determination can do when put together, and she hopes to inspire her audience at the Honors Institute Symposium to integrate all of their talents in pursuit of their goals, whether those goals fall within their undergraduate major or not.

“Forget about thinking outside the box,” she says. “I forget the box exists at all.”

Porter-Young’s experience left an indelible mark on her personal and business life.

Porter-Young was struck by the abundance of natural resources being farmed by people in extreme poverty.

Porter-Young says that being a creative entrepreneur allows her to be resourceful, and to save a ton of capital on advertising, and she thinks many people underestimate artists’ abilities to run a business.

Monaqui Porter-Young during her visit to the Paradise green tea farm in Sri Lanka.