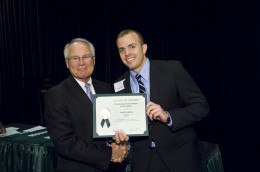 Aaron Shank, who also received a Presidential Commendation for Excellence in Co-Curricular Activities, will study stem cells as an Amgen scholar this summer.

It began with a simple internet search for summer internships. Before he knew what had happened, Wright State University biomedical engineering student Aaron Shank had been accepted to one of the most prestigious and exclusive programs in his field.

The Amgen Scholars Program is an international program funded by the Amgen Foundation with direction and technical assistance in the United States from the Massachusetts Institute of Technology (MIT).

“I did a Google search for summer internships and to me it seemed like the best one out of all of them,” said Shank. “I didn’t think I had much of a chance because it was also the most selective, but I applied anyway.”

Amgen is the world’s largest independent biotechnology firm. Through its Amgen Scholars Program, the Amgen Foundation provides 300 undergraduates in the United States and Europe with an opportunity to engage in hands-on research experience each summer. Shank’s goal is to help patients with Parkinson’s, Alzheimer’s, ALS and schizophrenia through stem cell research.

Shank will head to UCSD later this month and do much of his stem cell research at the renowned Salk Institute for Biological Studies. Selected from an extremely large pool of applicants, he will join 29 other Amgen scholars at UCSD. Nineteen students in the group are from universities outside UCSD.

The opportunity speaks for itself, but the goal will be to get stem cells to speak to students researching potential treatments for devastating diseases.

“We will be working with induced pluripotent stem cells (iPSCs) and looking for new ways they might be harnessed to combat neurodegenerative diseases,” said Shank.

Patients with Parkinson’s, Alzheimer’s, ALS and schizophrenia are poised to benefit from the work. Shank says some have already given small skin samples for the research.

“You can take the sample and, by adding some chemicals and proteins to it, actually cause the cells to become stem cells again,” said Shank. “In doing so, you reprogram them to become more infantile and flexible cells that can really differentiate into anything.”

After getting word that he was selected as an Amgen scholar, Shank says he knows that anything is possible and Wright State students are able to compete and succeed anywhere.

Admitting that his grade point average was high but not spectacular, Shank points to the help he got from Wright State faculty and staff as the key reason for getting into the program.

“I’m not quite sure how I got it. One thing is that I had great recommendations from professors here,” said Shank. “I also know that this particular program (UCSD) said they were impressed with my essays, and Alex Wenning and the awesome folks in the Honors department helped me immensely with those.”

Shank will spend 10 weeks in southern California before coming back to Wright State in the fall for his last quarter of undergraduate coursework.

Shank wants to continue working in areas related to regenerative medicine and is leaning heavily toward pursuing a combined M.D.-Ph.D. program after graduation.