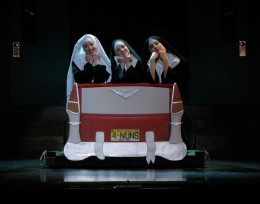 When most people think of nuns, their minds do not immediately jump to musical comedy. But recent Wright State University graduates Molly Emerson and Darien Crago say that while they were acting in West Virginia Public Theatre’s run of Nunsense the laughs were plentiful.

Nunsense is a hilarious show centered around a morbid premise: the cook has accidentally poisoned 52 of the sisters, and there’s not enough money to bury all of them. Four of the unlucky departed have a temporary resting place in the convent’s freezer. In true Tin Pan Alley tradition, the nuns decide that the best way to raise the funds is to put on a show.

Each sister is called upon to dust off some skill or talent. Crago portrayed Sister Mary Leo, who dreams of being the first “nun-ballerina,” as Crago puts it. Emerson played sister Amnesia, who can’t remember much about her talents or her life after suffering a debilitating blow from a falling crucifix.

“Nunsense is a fun, silly musical,” said Crago. “It has a classic show-within-a-show plot, and the whole show is full of witty jokes and parodies many iconic musicals.”

Crago and Emerson should know about iconic musicals. Both performed in numerous Wright State productions, including The 25th Annual Putnam County Spelling Bee, The Pajama Game, and this spring’s smash hit 42nd Street.

Wright State’s musical theatre program has long prided itself on preparing students for careers in professional theatre. It is an intensive immersion in dance, singing, music theory and every aspect of stage acting. Graduates have gone on to perform on and off Broadway, in touring shows and on cruise lines and in amusement parks. Some have gone on to become movie and television actors.

Crago and Emerson both say that their time in the musical theatre program helped prepare them for their job in Nunsense.

“My most important lesson from the Wright State theatre department,” said Crago, “was how to present myself as a capable, professional actress at auditions and within the rehearsal room.”

Emerson agreed, citing the faculty and her fellow students as instrumental in her development as an actress. “Every teacher was willing to help at a moment’s notice,” she said. “If you’re willing to put forth the effort, they’ll be there to help.”

Of her classmates, Emerson said, “we encouraged each other throughout our four years together and I learned so much just from watching them perform and approach their material.”

Now that Nunsense has wrapped up, Crago and Emerson will be performing in the West Virginia Public Theatre’s production of The 25th Annual Putnam County Spelling Bee. Afterwards, Emerson and Crago are is headed to New York City and the Great White Way. Emerson will begin rehearsals for the national fall tour of Andrew Lloyd Weber’s famous musical Cats and Crago will begin auditioning “with the big kids,” as she put it.

With any luck, she’ll end up with her dream role, one of the Chicago killer dillers, Roxie Hart and Velma Kelly.

“I’ve dreamed about moving to the city and being a performer for so long, I can’t believe its actually here,” said Crago. “But I couldn’t be more excited.”