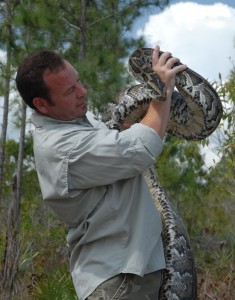 Heflick, a 1993 Wright State graduate got involved in Python Hunters on the NatGeo WILD television channel while working with the Florida Wildlife and Conservation Commission.

Growing up on an Ohio farm, Shawn Heflick was bitten by snake fever at the age of 7 when he saw his first Garter snake. Today, the Wright State University graduate stars in Python Hunters—a TV show that chronicles Heflick wrestling, capturing and saving giant pythons in the Florida Everglades.

Pythons normally average about 18 feet in length, but can grow longer. They are carnivores, using their sharp, rearward-pointing teeth to seize their prey, then wrapping their bodies around the catch and killing it by constriction.

“I don’t find it overly dangerous, but everyone else seems to disagree,” said Heflick, a conservation biologist and herpetologist.

A large number of pythons have made their way into the Everglades, possibly because of a breeding facility destroyed during Hurricane Andrew and due to pet owners releasing them into the wild. Pythons can live to be more than 20 years old.

Heflick said the issue of pythons in the Everglades has been exaggerated and sensationalized.

“They do not belong there–no doubt–but they are not the monsters portrayed by most of the media, and they do not eat people,” he said. “They do compete for resources with some of our wildlife, and they do feed upon some of the species that are protected. But so do countless other native animals within the Everglades. The real pressure on the Everglades comes from humans.”

Heflick became a nature lover while growing up on the family farm near the northern Ohio city of Marion.

“I ran amuck with my dog in the fields and woods, catching and observing wildlife,” he recalled. Then came his first brush with a mating ball of Garter snakes. “It was the coolest thing I had ever seen.”

Heflick threw himself into biology and later enrolled at Wright State, graduating in 1993.

“Wright State played a key role in my success,” he said. “I had a lot of opportunities to participate in field studies and also a mentor in Dr. David Goldstein, who gave me a great start and insight into science.”

Heflick got involved in Python Hunters on the NatGeo WILD television channel while working with the Florida Wildlife and Conservation Commission.

On the show, Heflick and the TV crew thread their way through the Everglades on trucks, all-terrain vehicles and airboats in search of the pythons. The capture is always made by hand.

“We collect as much data from them as we can, and some of them go to capture-training programs or universities,” Heflick said. “For me, being able to educate the masses about conservation and wildlife is the ultimate gratification from the show.”

Helflick’s life among wildlife has been a bit wild.

“Some of my greatest memories come from things most people would rather not have experienced–like being followed down a jungle trail at night in the Amazon by a jaguar or being charged by a bull elephant in Botswana and swimming with piranha and even crocodiles,” he said.

Heflick has been bitten “a thousand times” by non-venomous snakes and once in the Peruvian Amazon jungle by the deadly fer-de-lance viper, whose fast-acting venom can lead to loss of limb and death.

“It could have been a horrific event but it turned out OK,” Heflick said, “with me getting a titanium rod in my finger out of the deal.”