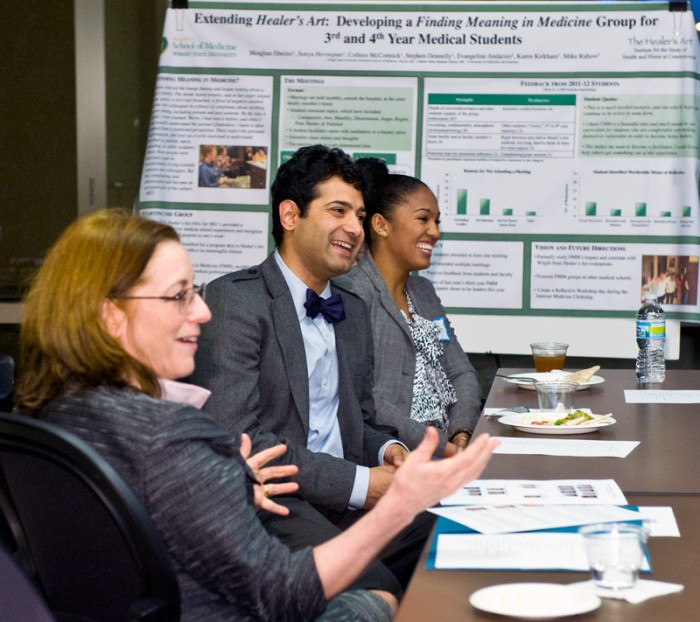 Lakshman Swamy, a fifth-year medical student at the Wright State University Boonshoft School of Medicine, has become a nationally-recognized student leader in improving health care as he works to enhance other students’ knowledge of quality and safety issues.

From his first days interviewing health care leaders on the medical school’s Radio Rounds, the nation’s only medical talk show produced entirely by medical students, to his starting the WSU chapter of Institute for Healthcare Improvement (IHI) Open School to his work developing leadership-focused curriculum and educational opportunities for others, Swamy continually encourages students and faculty to find their own roles in improving health care.

Most recently, he participated in a media session with IHI president and CEO Maureen Bisognano and others on Dec. 11, at the 24th Annual National Forum on Quality Improvement in Health Care in Orlando, Fla.

Swamy, who is the Midwest regional director of IHI Open School, an interprofessional educational community that promotes health care improvement, spoke about his experience as a medical student.

“Students are finding new ways to share the importance of quality improvement with their peers every day. My goal is to share those ideas,” said Swamy, who oversees more than 50 IHI Open School chapters. “Medical, nursing, pharmacy and many other health program students are rallying to find new ways to learn together by sharing experiences in case analyses and simulation labs, holding documentary discussions and creating interdisciplinary free clinics.”

Two years ago, Swamy never would have imagined discussing health care with national leaders in medicine. But when he was a third-year medical student on an internal medicine rotation at Mount Carmel Hospital in Columbus, Ohio, his supervising physician asked him to join him at a meeting about patient safety. He didn’t know much about safety issues. But that meeting altered the course of his medical career.

David Nash, M.D., a national expert in quality and safety, was one of the keynote speakers at that meeting. Swamy was intrigued by what Nash said. “He described how our systems are provider-centered rather than patient-centered and how chaotic and fragmented our systems of care are,” he said.

After the meeting, Swamy met Nash. “Dr. Nash has an intensely inspiring and motivating personality,” said Swamy, who will graduate in May with an M.D./M.B.A. degree. “He was passionate and excited for me to learn more and get more involved. That was enough to push me over the edge, and I started to look into some of the work he mentioned in his talk.”

He began researching quality and safety in health care and learned about the Institute for Healthcare Improvement (IHI) Open School Student Quality Leadership Academy. In 2010, Swamy attended the academy’s conference in Cambridge, Mass. Inspired by the speakers, Swamy returned to medical school and started the WSU chapter of IHI Open School.

Swamy also connected with Rebekah Wang-Cheng, M.D., an internal medicine doctor at Kettering Medical Center and the clinical director for quality, who also teaches on the faculty at the school of medicine. At the IHI national meeting in Orlando in December 2011, they presented a poster about quality issues, “Why Put Patients Behind Bars? Reducing Unnecessary Isolation through Rapid Pathogen Detection.”

While at the 2011 IHI conference, Swamy met Donald M. Berwick, M.D., former administrator of the Centers for Medicare and Medicaid Services and former president and CEO of IHI. Swamy, who also is one the hosts and cofounders of WSU’s Radio Rounds show, asked Berwick if he could interview him for the show. Berwick agreed, and the interview aired on Sept. 27.

“Dr. Berwick spent a lot of time with the students at the conference. If it wasn’t for IHI, I wouldn’t have gotten this interested in safety and quality in health care,” said Swamy, a Cleveland native who earned his undergraduate degree in neurosciences from the College of Wooster. “A big part of it was feeling empowered to be able to do something about it.”

Swamy also connected with Dr. Omar Hasan, a past fellow at IHI who was at that time the medical director for continuum of care strategies at Brigham and Women’s Hospital in Boston. Hasan, who is a national leader in improving health care quality and safety, is now vice president for improving health outcomes at the American Medical Association (AMA). Swamy moved to Boston for three months in May 2012 and worked with Hasan at Brigham and Women’s Hospital on a variety of quality projects, including drug safety, reducing costs in medicine and improving the transition for patients leaving the hospital.

By the summer of 2012, Swamy’s fervor for quality and safety issues resulted in his appointment as Midwest regional director for IHI Open School, a role in which he oversees more than 50 chapters. He helps facilitate ideas and shares information with other chapters and is involved in research projects on a regional level.

Despite his commitment to IHI, Swamy remains busy at Wright State. He is part of the school’s Physician Leadership Development Program, an innovative program that enables students to obtain a master’s degree (M.B.A. or M.P.H.) while pursuing their medical degree over five years. In addition, he was instrumental in the development of a health care leadership elective and a leadership conference at the school of medicine.

“Lakshman embodies what we teach in the Physician Leadership Development Program –leading by example,” said Sabrina Neeley, Ph.D., M.P.H., assistant professor in the Department of Community Health and director of the Physician Leadership Development Program. “Once he learned about quality and safety initiatives, he found a way to learn more and get involved and then bring that knowledge back to share with other students and faculty.”

Neeley noted that Swamy’s enthusiasm for health care improvement is contagious. He finds new opportunities for highlighting issues of concern in health care and then serves as a mentor to other students. “I have full confidence that he will make a difference in the U.S. health care system and that we will hear more about his work in the future,” Neeley said.

After graduating from medical school in May, Swamy hopes to enter a residency in internal medicine, ideally at a program that supports and encourages physician leadership and quality improvement techniques. Ultimately, he would like to work as a hospitalist or intensivist, a pulmonologist with critical care training, who works in a hospital Intensive Care Unit. He also plans to integrate leadership and quality and safety improvement into his medical career.