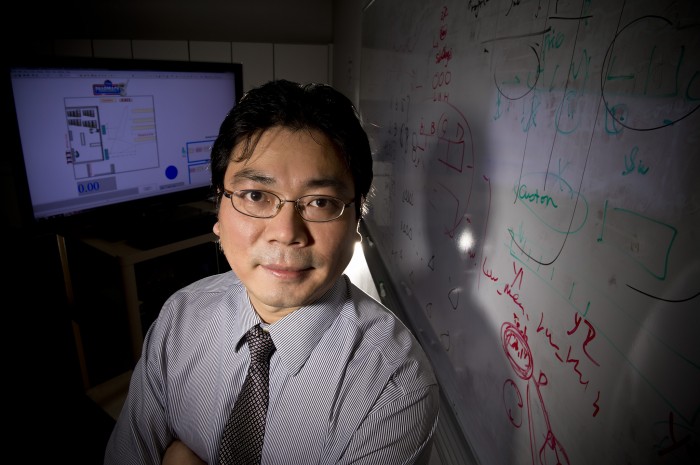 Working with The Kroger Company, Xinhui Zhang, Wright State University associate professor of biomedical, industrial and human factors engineering, is one of six finalists worldwide for the Franz Edelman Award, which recognizes outstanding examples of operations research-based projects that transform companies, entire industries and people’s lives, according to the INFORMS website.

“It’s the biggest competition in our field, and we don’t have anything like a Nobel Prize, so it is the highest award in operations research,” said Zhang.

“If you look at a pharmacy, the demand is uncertain, you don’t know day to day exactly the number of or particular medicines people will need,” said Zhang. “Although there might be some patterns, like during cold season, demand is never certain.”

Zhang said keeping too much or too little stock on hand in the pharmacy was costing Kroger millions a year.

“Too much, and you’ve got piles of money sitting in inventory unused when it could be making profit somewhere else,” said Zhang. “Too little, and you increase the risk of not having enough stock for the customer, resulting in costly special orders or losing customers, a great expense.”

According to Kroger, the system has enabled the company to reduce out-of-stocks by 1.5 million prescriptions, lowered inventory costs by more than $100 million, and yielded additional revenue of more than $70 million since Octover 2011, a net profit growth in one year of $170 million.

Pharmacy represents just 8 percent of operations for the Kroger Company. The models have gained support from senior executives, and the company is fast-tracking plans to incorporate the algorithms into new applications in general grocery, fresh produce, meat and others.

The five other finalists include operations research teams from Chevron, Baosteel of China, Dell, Delta Commissioner of Holland and McKesson.

Zhang said it is an immense honor just to be named a finalist. He said he owes it all to the pursuit of one thing: educating students.

“Our relationship started with a student intern being placed with the Kroger Company a few years ago. Our relationship grew as they realized we could help with Kroger’s practical operations research problems, and essentially this award is just an end result of our continuous efforts to teach students to solve practical problems,” said Zhang.

The winner of the 2012 Franz Edelman Award will be announced at a special awards banquet on April 8, 2013, during the INFORMS Conference on Business Analytics & Operations Research. The top finalist receives a $10,000 honorarium.