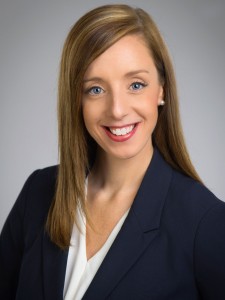 The American Medical Association (AMA) Foundation recently announced that Nicole Craker, a Wright State University Boonshoft School of Medicine student, is one of 19 medical students nationwide to receive the 2015 Physicians of Tomorrow Award.

She is the fourth Boonshoft School of Medicine student to receive the award since 2012.

She will receive a $10,000 scholarship. Recipients were nominated by their medical schools and chosen based upon academic achievement and financial need.

The AMA Foundation is dedicated to improving the health of America through support of scholarships and medical education. The Physicians of Tomorrow Award rewards need and scholastic achievement in the form of tuition assistance to rising fourth-year medical students.

Craker is in her fifth year of a five-year dual degree program, the Physician Leadership Development Program. Through this innovative program, medical students can obtain a master’s degree in business or public health while pursuing their medical degree over five years. When Craker graduates in May 2016, she will have earned both her M.D. and M.P.H. degrees.

At the Boonshoft School of Medicine, Craker cofounded the STEPS (Students Teaching Educational Plans for Success) Health Initiative, a student-led organization that addresses the health concerns of the homeless. Utilizing motivational interviewing, students log health goals for each participant and empower participants to take steps toward a healthier lifestyle.

“Working closely and collaboratively with this multidisciplinary team has been a fantastic experience and one that I hope to recreate in my professional career,” said Craker, who is from Willoughby, Ohio. “I want to be part of a multidisciplinary care team at an institution that celebrates research and innovation to enhance communication and efforts between the various health care professionals.”

Craker also co-founded the Annual Leadership Conference for medical students to enhance their skills as leaders in medicine. She hosted three successful conferences. She co-founded the Interdisciplinary Healthcare Council, which brings together faculty and students from the areas of medicine, nursing, psychology, engineering, business, social work and health communication. She also held the positions of chapter chair and regional membership chair for the American Medical Association.

“I hope to utilize the knowledge I have gained through my education and continued research to advocate for my patients and for the health of my community on a state and national level,” said Craker, who earned her undergraduate degree at DePauw University in Greencastle, Indiana. “Holding these positions in the American Medical Association allowed me a brief glimpse of the great work that physicians can do through their political advocacy. I hope to one day have a strong voice in the political conversation about health care in our nation.”

She also has volunteered with Hospice of Dayton, where she and another medical student helped create a service learning opportunity that has allowed more than 70 medical students to volunteer with social workers and chaplains. She was involved in Phi Rho Sigma, a national social and community service organization represented by the Alpha Upsilon Chapter at the Boonshoft School of Medicine. She helped plan two canned food drives, a clothing drive and a pancake breakfast to benefit various local groups, including The Food Bank and St. Vincent de Paul homeless shelters.

She has received numerous academic awards and recognitions, including her recent election to the Alpha Omega Alpha Honor Medical Society. In 2014, she was inducted into the Gold Humanism Honor Society. She also was recognized by the Wright State University Academy of Medicine with the prestigious Outstanding Third-Year Student Award.

Her love for the operating room has led her to aspire to a career in surgery. She wants to teach medical students and residents as a faculty member at an academic medical institution.

“A position in academic medicine will allow me to stay invigorated by my students, be at the forefront of my field and continue to contribute meaningfully to the conversations being held by the most influential minds in medicine through my research,” Craker said. “My goal is to have a fulfilling career serving others with integrity and compassion, while advancing our field through research and education.”