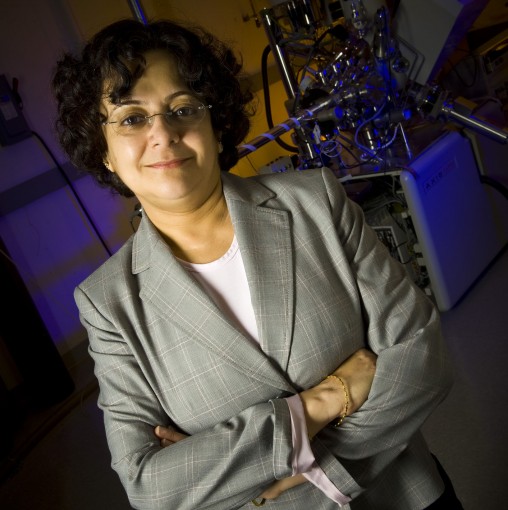 Sharmila Mukhopadhyay, director of Wright State’s Center for Nano-Scale Multifunctional Materials, was named a Jefferson Science Fellow by the National Academies and the U.S. Department of State.

A Wright State University professor of materials science and engineering has been selected by the National Academies and the U.S. Department of State to serve as a prestigious Jefferson Science Fellow.

Sharmila Mukhopadhyay, director of Wright State’s Center for Nano-Scale Multifunctional Materials, was among the 12 new Fellows for 2016-17 announced by the National Academies.

Vaughan Turekian, the science and technology adviser to the secretary of state, told Mukhopadhyay that she is to be congratulated because she was chosen from a large number of professors nationwide who are highly accomplished in their fields of science and engineering.

“We are confident that you will make significant contributions to the missions of the U.S. Department of State and U.S. Agency for International Development during your fellowship year and in the years beyond when you return to your campuses as Jefferson alumni,” he said.

Mukhopadhyay, a nanotechnology researcher, has focused her research on the intersection of nanotechnology and nano-biosciences. It includes the design of safe and sustainable nanomaterials for energy, environment and biomedical applications that has resulted in the generation of new catalysts, energy storage materials, antibacterial surfaces, biosensors and bone and muscle tissue scaffolds.

For example, Mukhopadhyay and her research team are developing near molecular-sized “nano-brushes.” These fuzzy structures have bristles made up of thousands of tiny, jellyfish-like strands. The increased surface area of the bristles, with proper coatings, enables them to behave like powerful cleaners that kill bacteria and destroy contaminants that pollute water.

The Jefferson Science Fellowships were established in 2003 as a model to help ensure that government policies reflect the latest findings and insights of academic science, technology, engineering and medicine.

Mukhopadhyay said she is honored to represent Wright State as a Jefferson Science Fellow.

“This is a rare opportunity to forge deeper connections between cutting-edge academic research and the federal government, and I aspire to make positive long-term impact on both sides,” she said.

Mukhopadhyay obtained her bachelor’s and master’s degrees from the Indian Institute of Technology and her Ph.D. from Cornell University.