What started it all sits in the basement of Lee Furry’s Springboro home. It’s an unfinished model of the white, wedge-shaped Imperial Star Destroyer from the original “Star Wars” movie. A very good one.

The destroyer sparked Furry’s interest in model-making when he was a 12-year-old boy and first saw it on the screen at a theater in the Chapel Hill Mall in Akron. He has turned that passion into an artistry that today has enabled him to sell his models for up to $5,000 apiece to customers around the world.

Furry believes the secret to his success is attention to detail.

“It’s amazing how many models I see where the proportions are not correct. That’s what bothers me the most,” he said. “I will obsess over the smallest little parts on a model — for weeks sometimes — trying to get it right.” 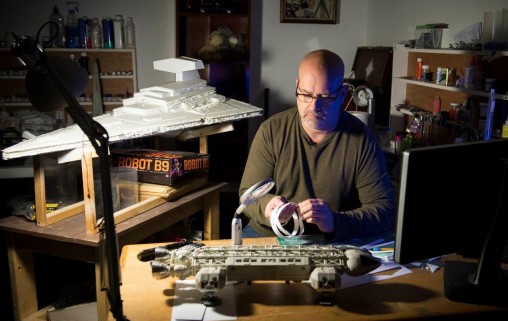 When he’s not working on models, the Wright State University motion pictures alumnus works as chief photographer at WKEF-TV, where for the past 22 years he has captured images that tell stories about life in the Dayton area.

Furry enjoys the daily satisfaction of a job well done and the opportunity to do it over and over again.

“One of the things I like about television news is that every day you hit the reset button,” he said.

Furry grew up in Cuyahoga Falls, Ohio, and as a boy began to develop his model-making skills. But cars, girls and other interests intervened in the teen years, and Furry put his models on the shelf.

After graduating from Cuyahoga Falls High School in 1983, he joined the Army and found himself stationed in South Korea, little more than a mile from the border of communist North Korea. 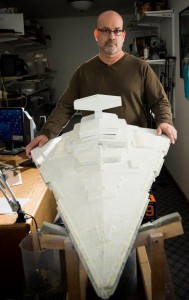 Lee Furry was inspired to resume his model-making hobby after seeing a model of an Imperial Star Destroyer at a traveling Star Wars exhibition.

“One of the first things I was told was that the North Koreans had artillery honed in on our barracks. The first night I didn’t sleep too well,” he said.

Furry and his fellow soldiers would go on alert two or three times a month. Several times they went on full alert, loaded their guns with ammunition and once were even preparing to roll out the gate until they were told to stand down.

Furry had been interested in making films for as long as he could remember. So after leaving the Army, he enrolled in Wright State’s prestigious Motion Pictures program.

“You develop a thick skin in the Wright State film program. There is a lot of criticism,” he said. “But I think part of that is so you develop a critical eye.”

Furry discovered that he had knack for storytelling and won a Director’s Citation award at the Black Maria Film Festival in New Jersey. He began freelancing and working on a variety of independent films, mostly in the lighting departments.

Somewhere along the way, Furry began tinkering with models again for fun. When he sold a model of the Batmobile for $350, it was an eye-opener.

“I was like, ‘Wow, there’s a market for this?’” he recalls thinking.

A traveling exhibition in Toledo of the actual Star Wars studio models — including the Imperial Star Destroyer — inspired Furry to start building his own model destroyer, a four-foot-long version.

He began by cutting up poster board and taping pieces together to get the proportions and angles correct. Then came the styrene plastic sheets and strips and an endless amount of sanding and finishing work. The detail is so intricate and exact that a magnifying glass is Furry’s best friend. 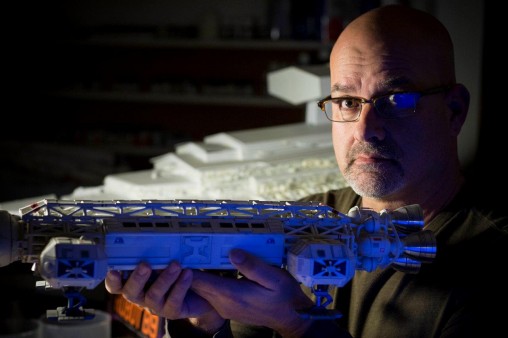 Lee Furry prides himself on his attention to detail when making a model.

Furry launched his own website, posting photos of the model.

“I figured if anyone in the future wanted to build one, they would at least have something to go on,” he said. “The website seemed to catch on and started developing some traffic.”

He got a call from a man from Great Britain who asked Furry if he would build a smaller, two-foot-long model of the destroyer for him.

“I had never done a commission before, so I threw a number at him that sounded outrageous,” said Furry. “And he said, ‘OK.’”

It took Furry eight months to build the destroyer, but he pocketed $2,500. He is currently working on several large-scale Imperial Walkers, one of which will be sold to a buyer in France.

“When I get done with a model, I usually sit back and I just feel proud,” he said. “It’s something I created that started off life as a sheet of plastic.”