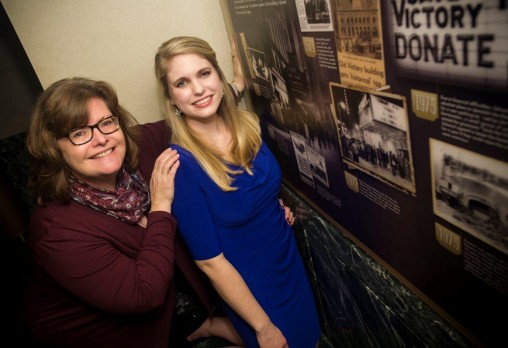 Dixon was scouring theater-related documents housed in Wright State’s Special Collections and Archives at Dunbar Library when she came across a photo of the Eagles, one of the best-selling bands of all-time. Turns out the Eagles played at the Victoria just a year after being formed and the year in which “Take It Easy” exploded on the rock scene.

“I knew there had been rock shows here in the ’70s, but when we found the photo that substantiated the fact that the Eagles played here in ’72, I was floored. I had no idea,” said Sue Stevens, Victoria Theatre Association’s vice president of Marketing & Communication.

The photo is among the images, newspaper clippings and showbills featured in a newly created pictorial timeline of the theater. The timeline was installed March 17 on the wall of the mezzanine to mark the theater’s 150th anniversary.

Dixon, who is working on her master’s degree in public history at Wright State, was the project researcher.

“We could not have done this without Shelby,” said Stevens. “There was information that we already had, but there were a lot of holes. Shelby was unearthing all of these cool pieces of information.”

The four-panel timeline is an historical kaleidoscope. There are early exterior shots of the theater with horses and carriages. There is a 1925 photo of a box crafted by National Cash Register carpenters from which Houdini escaped. Showbills from productions like “Gone With the Wind” and “West Side Story” beam from the timeline.

The Victoria staged first-run, Broadway tours of Rogers and Hammerstein musicals like “Oklahoma” and “South Pacific.” There was a production of “Ben Hur” with horses on stage. Actor Henry Fonda performed there in “Mister Roberts.” Actor Tom Hanks even performed there as part of the Great Lakes Shakespeare Festival tour. 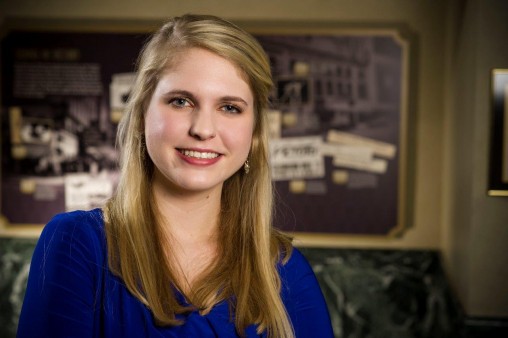 One of the theater’s most popular eras was the 1960s, when it showed Disney films that have since become classics. Photos show lines of waiting parents and their children stretching out the theater door and around the block for favorites like “101 Dalmations.”

“The timeline helps people know the full story,” said Stevens. “I want people to see the depth of the history, how far it goes back, all of the stars who have been here, all of the different kinds of performances.”

Stevens said Dixon brought research skills to the effort, as well as being organized and productive — and displayed a great curiosity.

“If it hadn’t been for Shelby’s availability to do this project, it probably wouldn’t have happened,” Stevens said. “There is no way we could have done it on our own.”

Dixon grew up in Fairborn, where during high school she and her parents lived in the Osborn Historic District in a house that was built in 1901. Her passion for history was fired further by two of her high school teachers.

Dixon earned her bachelor’s degree in social science education from Wright State in 2014.

“I really enjoyed working with people and teaching them about history,” she said. “It’s my favorite area within that program.”

Dixon was interning last summer at the Warren County Records Center and Archives and discovered that Victoria Theatre was looking for a project researcher to help develop the timeline. It was something she felt would be perfect for her senior capstone project.

So in August, she began digging into the archives of Wright State, the University of Dayton, Montgomery County and Dayton History, an organization that preserves and displays some of the city’s most precious historical treasures. She also sat in on interviews of people who were prominent in the theater’s history.

Dixon loves working in the archive, tracking down primary documents and puzzling out the history.

“You just learn so much from the primary documents and can interpret them in so many different ways,” she said.

Dixon first wanted to get a sense of ownership and management of the theater. So she began looking at deed books and lease books and traced the site back to 1855, when there was a lease on the site for a fire station.

The theater opened as the Turner Opera House on Jan. 1, 1866, as smoke was still clearing from the Civil War. It was the dream of distillery owners Joseph and William Turner, who spent $325,000 to build it.

“Many people don’t realize how long this building has been here and how long this theater on the corner of First and Main streets has been an anchor of downtown Dayton and the gathering place for generations of Daytonians,” said Stevens.

A fire in 1869 — fueled by the beeswax finish in ceiling frescoes — engulfed the entire building and it had to be rebuilt. The theater later survived a second fire and the Great Dayton Flood of 1913, which ruined the inside.

The theater was slated for the wrecking ball in 1975, but volunteers launched a feverish fundraising campaign and saved it. Today, the theater is home to the Dayton Ballet and hosts classic films, theater and musical performances and productions for schoolchildren.

Dixon overwhelmed theater officials with great history, so much that it became a challenge as to what would be used in the limited space for the timeline. So they broke the history down to four time periods, one for each panel, and clustered the biggest events around those periods.

“I could have made a timeline three times this size with all of the information we have,” Dixon said. “There are so many important moments in this theater’s history. We really had to go through and make some tough decisions on what were the most important things.”

Dixon won the Kyle Pitzer Capstone Project Award for the timeline project, judged by the History Graduate Committee to be the most outstanding of the year. She believes the project will open up new opportunities for her.

“I’ve seen what exhibit designers do and understand how information can be organized, how to edit information down to what you really need for a display like this,” she said. “I’ve also gotten a lot of archive experience.”

Victoria Theatre Association is celebrating the 150th anniversary of its namesake venue as part of The Next Stage campaign, which is raising endowment funds for the stewardship of all three venues the association owns and manages: Victoria Theatre, Benjamin & Marian Schuster Performing Arts Center, and the Metropolitan Arts Center, home to the Loft Theatre. Additional anniversary activities include an event for young professionals “Spirits at the Vic” on May 26, the summer Cool Films Series, and the VIC150 Music Series which launches/launched with the band Buffalo Killers on May 7.