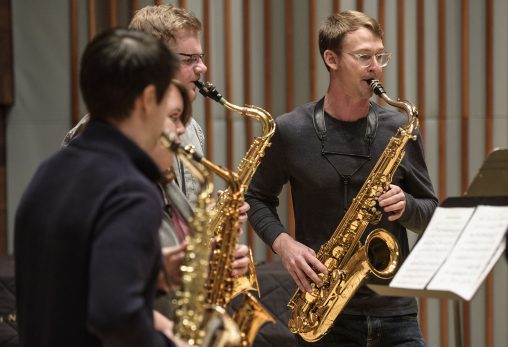 It was a little like the Houston Astros giving tips on hitting and fielding to college players. In this case, it was acclaimed saxophone professionals sharing skills and insights with Wright State University music students.

Project Fusion, a young saxophone quartet described by one reviewer as a group that sparkles as much as the instruments in their hands, conducted a master class workshop for Wright State’s saxophone students Oct. 30 on the stage of the university’s Schuster Hall.

Jagow noted that Adolphe Sax, the Belgian musician who invented the saxophone in the early 1840s, had four goals for the instrument — that it have the power of brass, the agility of woodwinds, the sonority of strings and the flexibility of the human voice.

“They really conquer all four of those goals,” Jagow said of Project Fusion. “It’s pretty fascinating.”

Formed in 2010 by four graduates of the Eastman School of Music, Project Fusion won the gold medal in the Senior Wind Division at the 40th Fischoff Chamber Music Competition in 2013. That same year they became the first saxophone quartet to earn the Grand Prize as well as the Hugo Vianello Audience Choice Award at the 6th Plowman International Chamber Music Competition.

For Sawzin, the master class workshop was a homecoming. He earned his bachelor’s degrees in music education and saxophone performance from Wright State, graduating in 2009.

“I found that I felt instantly comfortable here,” Sawzin said of his days at Wright State. “I actually didn’t feel that freshman anxiety or feel out of place. I felt welcomed right away.”

Jagow said she is proud and excited to watch Sawzin’s career blossom.

“We like to think of Michael as a local boy who made it big — for sure,” added Wright State music professor Christopher Chaffee, vice president of Chamber Music Yellow Springs.

Chamber Music Yellow Springs is a highly successful nonprofit with a 30-plus year history of presenting high-end classical music in the community. It sponsored the Wright State workshop as well as an Oct. 29 concert in Yellow Springs. The group’s president is Charles Taylor, dean emeritus of Wright State’s College of Liberal Arts.

The Wright State quartets were told about effective warmup techniques and the importance of non-verbal communication while playing, learning the stories behind the songs and learning from failure.

“It’s good for them to hear things I hope I have said, reinforced by someone else,” said Jagow.

The Project Fusion players told the students about their careers, from playing professionally to teaching K-12 and at college. The students were told to embrace music education as a degree because they will likely spend time teaching even if they are also performing.

Sawzin, who is from Wilmington, works as the main administrator for OuterArts Maryland Inc., advising the nonprofit on curriculum and helping manage the group’s two-week summer orchestra festival.

Project Fusion also joined one of the Wright State quartets on stage and played with the students, putting on an impromptu concert that filled the hall with the rich tones of eight saxophonists.

Sawzin called his return to Wright State “a great experience.”

“It just makes me feel like things are going well here,” he said. “I am prouder than ever saying that I’m from Wright State. It’s very fun to come back here and hear how much the bar is raising.”