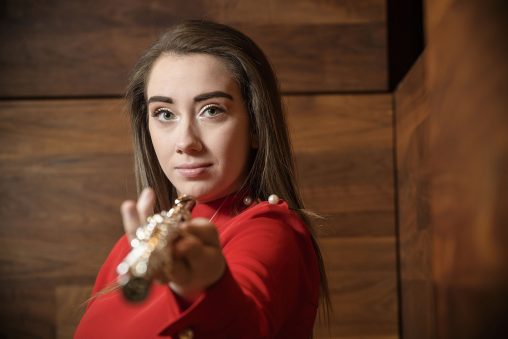 Micki Hayes, a pre-music major, will perform with the acclaimed Blue Knights Drum and Bugle Corps. (Photo by Erin Pence)

Micki Hayes, a pre-music major at Wright State University, has been selected as a drum major for the internationally acclaimed Blue Knights Drum and Bugle Corps, a Colorado-based youth performance group.

Hayes will be only one of five drum majors for the 2019 season, which includes performances in Ohio, Michigan and California as well as training camps around the country.

“I am so incredibly excited to represent and serve a unique and amazing group of people whose excellence I strongly believe in, especially at an organization that I’ve spent many years looking up to,” said Hayes.

The Blue Knights are part of Ascend Performing Arts, which showcases top young musicians and is recognized as the Rocky Mountain region’s most visible performing arts organization. The group also produces the Broncos Stampede Drum Line and Broncos Brass to entertain NFL fans at Denver Broncos home games every season.

Ascend Performing Arts programs tour nationally. And the group’s educational outreach clinics annually impact over 1,000 youth with hands-on instruction and provide more than 3,400 students with the opportunity to attend and participate in clinics and programs.

“Last year I was able to experience how the Blue Knights bring excitement, happiness and touch people’s lives all over the country from behind the scenes,” said Hayes, who was a member of the Blue Knights Admin team. “This year I am humbled and more than excited to join the corps on field, and I look forward to achieving new heights of creative excellence with the Blue Knights family.”

Hayes graduated from Lexington (Ohio) High School in 2016, where she served as the drum major for the Lexington Band of Gold and participated in ensembles such as the Bands of America National Honor Band and the Cavalcade of Bands Tournament of Roses Honor Band.

A pre-music major, Hayes is an active member in the university’s Ohio Collegiate Music Educators Association chapter, flute choir and has served as the conductor for the Pep Band.