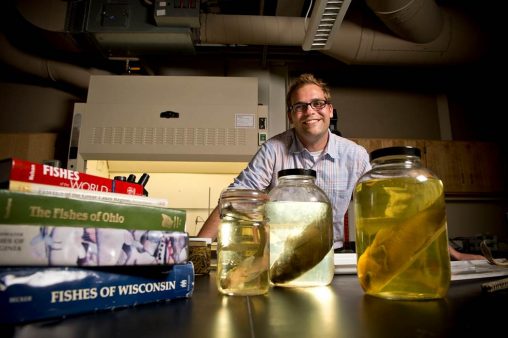 Steve Jacquemin, associate professor of biology at the Lake Campus, was invited to the Ohio governor’s residence to discuss how wetlands can help reduce nutrient runoff and harmful algal blooms.

Steve Jacquemin, associate professor of biology and research coordinator, was invited to the governor’s residence on July 19 to discuss how wetlands can help reduce nutrient runoff and harmful algal blooms. Jacquemin was joined at the session by the directors and other representatives of the Ohio Environmental Protection Agency, Ohio Department of Agriculture and the Ohio Department of Natural Resources as well as experts from several other universities.

The meeting occurred shortly after the governor signed a budget bill that earmarks $172 million over two years for the H2Ohio fund, which will fund programs to protect Lake Erie and other state waterways from pollution.

Jacquemin, who is widely known for his work in gauging the health of lakes, rivers and streams, said he was encouraged by the meeting.

“I am thrilled to see his very important work on water quality getting attention at the very highest levels of state government,” said Krane. “We are very proud of how great work by basic researchers like Dr. Jacquemin translates directly to benefits to our students, communities and society in general.”

Jacquemin, his team of undergraduate students and area professionals have worked with wetlands around Grand Lake St. Marys that have reduced nutrient runoff from farms into the lake. Jacquemin says significant progress has been made.

In announcing the H2Ohio initiative in March, DeWine said communities around the state are facing algae blooms, failing septic tanks and nutrient pollution. “We cannot continue to lurch from water crisis to water crisis,” he said. “I am proposing an H2Ohio initiative that would allow us to invest in targeted, long-term solutions to ensure safe and clean water across the state of Ohio.”

The fund will be used to help minimize nutrients and other runoff in Ohio waterways, create more wetlands to naturally filter out nutrients and sediment, utilize new prevention and treatment technologies, and support research and data collection.

Last year, research at the Lake Campus on the water quality of Grand Lake St. Marys was featured in a prestigious environmental journal and sparked interest from a watershed group at Lake Champlain in Vermont. The study, led by Jacquemin, was published as the cover story in the January/February 2018 issue of The Journal of Environmental Quality. The bimonthly journal covers impacts of human activity on the environment, including terrestrial, atmospheric and aquatic.

The study documented long-term changes in the water quality of Grand Lake St. Marys over the past decade related to nutrient loading from agricultural runoff following a series of rules, such as a ban on the use of manure in the winter, and best management practices that have been implemented beginning in 2011.

Jacquemin and his research team documented overall nutrient reductions at up to nearly 60 percent at most flow conditions for sediment, nitrogen and phosphorus concentrations and loadings. Jacquemin said the study could serve as a model for other regions, which could implement the practices to improve the quality of their watersheds.

Collaborative efforts between agriculture and water quality groups surrounding Grand Lake St. Marys were highlighted by former Ohio Gov. John Kasich and other state officials during a news conference in July 2017. Kasich referenced the work involving Grand Lake St. Marys when he signed an executive order designating eight watersheds in the western basin of Lake Erie as “Watersheds in Distress.”

A few months earlier the Lake Campus opened the doors to its Agriculture and Water Quality Education Center, a state-of-the-art facility that houses labs and classrooms dedicated to these interrelated subjects.

Jacquemin joined the faculty at Wright State in 2013. Prior to arriving, he interned with the U.S. Fish and Wildlife Service at Okefenokee Swamp, a shallow 438,000-acre wetland that straddles the Georgia-Florida border. He later studied environmental management at the University of Havana, joining Cuban marine biologists in doing surveys of large sharks, rays and other fish inhabiting the coastal waters around the island’s coral reefs.