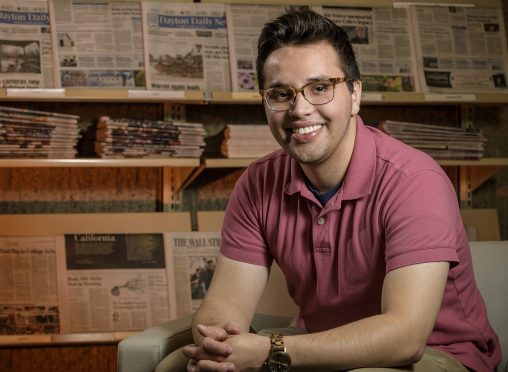 Journalism wasn’t really on his radar when he arrived at Wright State University. Lucas Gonzalez started out in the Motion Pictures Program and gravitated to political science before working as an editor at The Guardian student newspaper.

Today, the 2019 graduate is working as a reporter at The Daily Times in Salisbury, Maryland, which is part of the USA Today Network of newspapers and is in the shadow of Washington, D.C., and Baltimore.

“I’m working for a newspaper that has a very positive reputation and is a very recognizable brand,” said Gonzalez. “I think that is phenomenal as a first, full-time job. A lot of people can’t say that, and I’m really fortunate and blessed to have gotten the offer. I’m ecstatic about it.”

The Times covers Salisbury and its surrounding area, Ocean City, the Delaware beaches and the Eastern Shore of Virginia. Gonzalez reports on breaking and trending news, including crime, fire and weather stories. He also works on longer-term politics and features projects.

Gonzalez’ goal is to write some front-page stories and hone his investigative skills. He says he has always been attracted to investigative-type reporting.

“Truth is a value which I consider to be of the utmost importance,” he said. “As a journalist, I hope to be a messenger of truth.”

Gonzalez grew up in the small northwestern Ohio city of Wauseon. His father works in financial aid at the University of Toledo and his mother teaches high school Spanish.

“My parents brought me up right,” said Gonzalez. “I owe a lot to them, teaching me a lot of life lessons.”

But he wanted to escape the small-town confines of Wauseon. So after graduating in 2015 from Ayersville High School in nearby Defiance, he enrolled at Wright State, attracted by the university’s prestigious Motion Pictures Program.

Gonzalez had become interested in film as a career by just watching movies. He took a special interest in classic films and foreign cinema from countries including Japan, Sweden, France, Italy, Germany and many Latin American countries. He was inspired by the works of Stanley Kubrick, Alfred Hitchcock, Akira Kurosawa and Federico Fellini.

“I ultimately decided that I wanted to get a hands-on experience with the so-called magic of movie-making,” Gonzalez said.

So he jumped into the Motion Pictures Program with the idea of becoming a producer or director. His first job at Wright State was with the video production crew that live-streamed sporting events.

“That got me some pretty good experience at working under pressure,” he said. “And I obviously got some camera experience.” 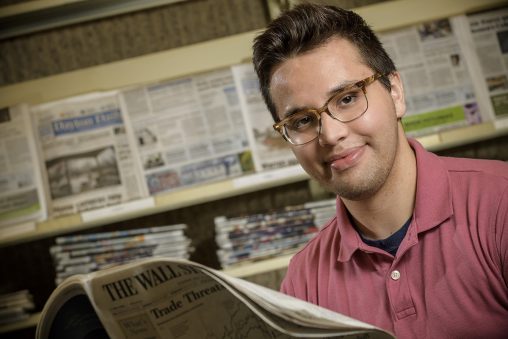 Gonzalez enjoyed his classes but found he was slowly losing his passion for film production. What he did have a passion for was politics. So he switched his major to political science.

Writing was one of Gonzalez’ strengths, so when a classmate suggested he apply to The Guardian, he did. He worked there as news editor beginning in the fall of 2017, writing three news stories a week.

“That was pretty invaluable experience,” he said.

Lee Hannah, assistant professor of political science, said he knew Gonzalez had a special talent after reading his first essay.

“He really made it seem effortless,” said Hannah. “There were times when I’d read his work and think, ‘Why couldn’t I think to articulate that concept in this way?’ He’s one of those students you hope will stay in politics and journalism because he’ll make such a positive contribution.”

Last summer, Gonzalez landed an internship with the Springfield News-Sun, where he reported and wrote local news and feature stories. It was there that he realized journalism was his calling.

“For me, there is a certain satisfaction in seeing the final product. It’s really gratifying to see that,” he said. “In addition, I like the conversations I’ve had with people. I’ve always been a pretty inquisitive person so I guess it comes naturally to me.”

Gonzalez returned to the News-Sun as an intern earlier this year and was later hired part-time as the social content producer. He graduated from Wright State on May 4 with a bachelor’s degree in political science and started his new job at The Times a few weeks later.

“I’ve been truly blessed with some excellent mentors and connections at Wright State University. Without them I can’t say for sure I would have been as successful as I am,” he said. “Wright State University has been very good to me. It was challenging at times, but I’ve really had the good fortune to meet some incredible people.”