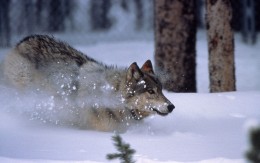 A lush thicket several feet high flanks a clearing on the forest floor. A marsh lies on the other side, wrapping around the back of the open space and creating a danger zone for woodland creatures not at the top of the food chain.

For deer, areas like these are kill zones—confined spaces perfect for wolves to take down a trapped animal—and not coincidentally a location where forest wildflowers are flourishing, because they aren’t being eaten by deer.

There is a connection between wolves and wildflowers. Whether assistant biology professor Tom Rooney realized it or not, he began assembling the data to link the species several years ago.

About 10 years ago Rooney began tracking plant populations over a 50-year period in Michigan and Wisconsin.

“We were going back to thousands of forests and prairies where wildlife surveys had been conducted to see what had been changed,” said Rooney.

Rooney and his students had expected to find some European and Asian plant species had migrated to North America, but instead found something far more interesting. In some places, flowers had been decimated by deer.

“In the places where deer populations were particularly abundant, those losses of wildflower species were near 60 percent,” said Rooney. “It was like an eradication.”

Species like the large-flowered white trillium, Solomon’s seal and Blue-bead lily suffered heavy losses in some areas, but were flourishing in others. Rooney began to investigate. 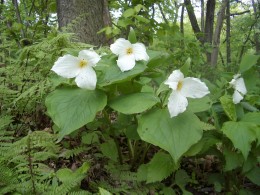 Species like the large-flowered white trillium (above), Solomon’s seal and Blue-bead lily are flourishing in some areas again because of wolves.

Despite a much-publicized wolf reintroduction effort in Yellowstone National Park in the early ’90s, for several decades the largest wolf population in the lower 48 was in Minnesota.

Suddenly the deer had company.

“They’ve basically existed, from a deer’s perspective, in a really good neighborhood,” said Rooney. “There’s about one time of year where they really have to be careful— when they’re fawning.”

At that time, deer could lose fawns to coyotes and black bears. Other than that, predation was not really a problem.

“Suddenly in the ’90s, wolves are back on the landscape, and they’re there year-round and they’re not just after your fawns. They’re after you as well,” said Rooney.

In reality, wolves don’t often hunt deer, but the reintroduction of a large hunter at the top of the food chain did have its affect all the way down to the flowers on the forest floor.

“You no longer see deer in the middle of the day. They’re only out at dawn and at dusk, the way they used to be,” said Rooney. “And as a result there’s been a relief of pressure on their favorite wildflowers—their favorite food, because wolves really have them in a state of fear.”

Rooney said that fear has led to a floral facelift in the kill zones. 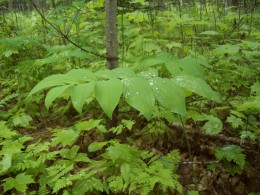 Rooney and his students had expected to find some European and Asian plant species had migrated to North America, but instead found something far more interesting. In some places, flowers had been decimated by deer. The above example is not the case.

“In these places in the landscape where there aren’t really clear escape routes, we see wildflowers recovering in abundance. They’re big they’re robust. It looks like they haven’t been eaten in five or six years,” said Rooney.

It’s been five years since Rooney began tracking the relationship in earnest. Rooney typically spends two to three weeks in wolf habitat each year and sends a student into the bush a couple times of year as well.

“My site is thick with wolves, which is really nice. You can hear them howl at dusk,” said Rooney. “It’s cool to be out in the woods and know that there is a large animal out there that, if it chose to, could kill you.”

There haven’t been any wolf attacks on humans in America in decades, but wolf re-population is a touchy subject in Wisconsin, where wolf populations are being delisted from the ESA.

A wolf hunting or trapping season is likely to begin in the state in the next year, motivated by a wolf population that has grown 15 percent in the last year, coinciding with live stock and pet attacks that have increased by 15–20 percent too.

“Part of me has a very negative reaction to that because they are very social animals,” said Rooney. “If you kill the dominant male or female, then the pack can die off.”

On the other hand, Rooney says he does support the hunting of wolves because it gives the people who are anti-wolf an invested stake in the wolf population.

“And I can’t think of a single counter example in the era of modern wildlife management where building a hunting constituency for an animal has led to its endangerment,” said Rooney.

Rooney isn’t quite so torn when it comes to hunting deer.

“Deer hunting is getting to the point where it is no longer effective in controlling deer populations,” said Rooney. “There’s just not enough freezer space. When the freezer is full, the hunting stops.”