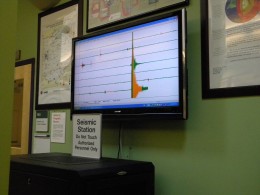 The earthquake was felt by many people on both Wright State campuses. The seismic station at the Lake Campus clearly captured the quake on its monitor.

The 5.8 magnitude earthquake that shook much of the East Coast was felt right here at Wright State University.

The U.S. Geological Survey reports that the earthquake’s epicenter was in Mineral, Va. The Pentagon was evacuated, and the National Cathedral in Washington, D.C., is among the buildings reportedly damaged.

Wright State’s Physical Plant workers were surveying all campus facilities, but did not expect to find any damage.

Moments after the vibrations, students, faculty and staff took to email and social media to talk about the quake.

Here’s what they had to say:

“I noticed my Pepsi began to dance around my desk, so I asked a co-worker if he noticed the vibration. He said ‘yes’ and we both had an ‘Oh’ moment.”
—Jonathan Maze, senior political science major

“I was sitting at my desk when I heard the ceiling begin to creak. It sounded like something heavy was walking on the ceiling above me. I thought it might be a construction worker. Then the building swayed.”
—Mia Honaker, administrative specialist, Asian/Hispanic/Native American Center

“It felt like my chair was rocking back and forth. I first thought I imagined it until co-workers said they felt it too. It was really weird, just a rocking motion. It was very bizarre.”
—Shannon Lynn Norton, department support supervisor, Biochemistry and Molecular Biology

“I was at my desk typing up some emails when I felt the building shaking a bit. I looked up and saw one of our office plants swaying back and forth, too. I was kind of surprised because I’ve never felt an earthquake before, and it’s not something you think about living in Ohio. It’s a little scary because I know how much destruction they can cause if they are large.”
—Brandy Zapata, senior mass communication major

“At first, I thought someone was playing a prank, shaking my cubicle walls. Then I realized I could also feel it in the floor. Only then did I think it could be an earthquake.”
—Tamarus Stokes, administrative specialist, Curriculum & Instruction

“I was working in the Vice President for Student Affairs office when it happened. Many of the other staff members were leaving their offices to see if other people felt something or if they had imagined the whole thing. Quickly everyone agreed that it was an earthquake, and within a few minutes we were informed that there had been a large quake on the East Coast.”
—Paul Reed, senior accounting/finance major and current Student Government president