Lake Campus TAPS into the power of smartpens 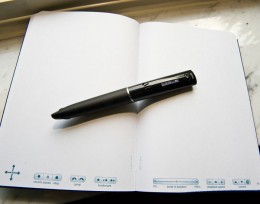 Wolfe and his team are interested in what the smartpen technology can offer to students with disabilities.

Do you ever forget what your professor said in class?

Do you ever review your notes only to find that you don’t understand what you wrote?

Do you ever wish you could go back to class and relive the moment when your professor explained something?

A smartpen can help you do just that, and one Wright State professor is exploring the technology’s potential to enhance learning, especially for students with disabilities.

“Smartpens let you see and hear information at the same time, which is a great way to learn,” said John Wolfe, Ph.D., director of Technology, Academic/Instructional Programs, and Services (TAPS) at the university’s Lake Campus.

Each pen contains a mini-computer and features a camera at the tip. Students use the pen with special paper printed with a finely dotted pattern. As the student writes, the pen records audio as well as what is being written. Those two elements are synced and stored in the pen’s memory.

So a student can tap anywhere in his or her notes and replay exactly what the professor was saying at that point, said Wolfe. It’s a great tool for review.

Students can even upload their notes to a computer to get a typed copy.

“I have noticed that many students using the device are now better at making make critical decisions regarding what is important during the note-taking process,” said Wolfe. “That is to say, students are becoming more and more independent in their own educational process.”

Professors can tailor their classes to students with smartpens by creating “pencasts.” These recorded presentations turn notes and audio into an interactive document that students can replay on their own computers. “The pen allows students to select exactly the material that you need to hear again,” Wolfe added. 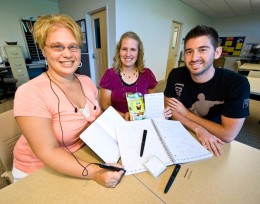 While the pens’ features can enhance any student’s education, Wolfe and his team are particularly interested in what the technology can offer to students with disabilities. The smartpens can be used to help students with a broad range of disabilities, including mental impairments and physical disabilities.

In many ways, students with learning disabilities have a harder time, said Wolfe.  They often have to spend more time studying due to how they process and absorb information. It’s also less obvious to others that they need help and what type of help they need. Others may become impatient with them because they can’t see the disability.

Wolfe explained that many students with disabilities do not want to draw attention to their special needs. Smartpens are less noticeable than an interpreter or an aide. They also allow these students to be more self-sufficient.

“The likelihood of them having someone with them at all times on the job after college is pretty slim,” said Wolfe. “We want them to be as successful as possible in the real world. This might help them be more independent in the workplace.”

Of the approximately 72 students with disabilities at Lake Campus, Wolfe was able initially able to provide about half with a Livescribe Echo™ smartpen and training on its usage. The remaining and future disability students will be able to borrow the devices and individuall learn how to use them while they are enrolled at the Lake Campus.

“This is a tool that is portable, lightweight and discreet,” said Wolfe. “It can help them compete on the same playing field as everyone else.” 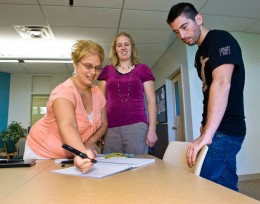 “I instantly fell in love with the technology,” said Shelia Goins, a student assistant in the TAPS office. “I no longer worry that I’m missing what the instructor is saying while I am taking notes,” Goins added.

Many faculty have noted that using the devices have been helpful not only in the note-taking process but also in helping students to keep up with their classes if they happen to miss a class lecture. Wolfe would like to get the pens into the hands of more students, perhaps earmarking certain difficult courses (e.g. mathematics) so when students sign up for a course they could purchase or lease one.

Wolfe has received a series of grants totaling nearly a half of a million dollars to fund the smartpen project from the Ohio Rehabilitation Services Commission (ORSC) and the Ohio Board of Regents (OBR).

Through Wolfe’s efforts, the Lake Campus has been able to acquire a variety of assistive technology tools including equipping a state of the art lab with computers, iPads, laptops and literacy software to help students with reading and writing difficulties. He hopes to place technology in the hands of students who need it the most – the disability student population. The department recently hired a retention/technology specialist to help students using the pens and other TAPS resources.

“The smartpens have provided tremendous support for our students, faculty and staff,” said Bonnie Mathies, dean of the Lake Campus. “We have been hearing testimonials from each group about how much they appreciate these pens,” she said. “It seems that each user finds a unique way to use this tool.”

For more information on TAPS at Lake Campus, visit http://www.wright.edu/lake/academics/ais.html.