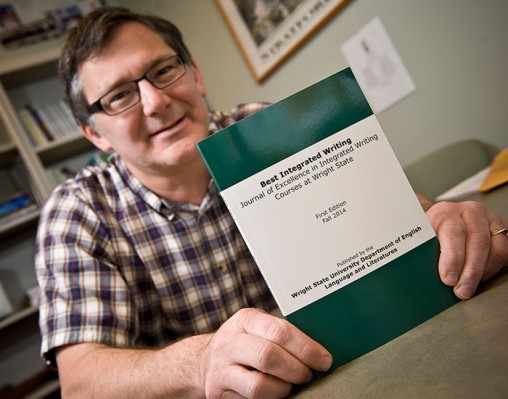 Scott Geisel teaches creative writing at Wright State, where he earned his B.A. and M.A. in English. He has published several short stories and edited a literary magazine and an anthology, and teaches English students the tricks of the trade.

If you had met Wright State University English professor Scott Geisel while he was in high school, you might not have immediately pegged him as destined for a life in academia.

“I skipped school a bit,” admits Geisel, who says he was also a bit of a prankster and wore his hair and beard long and wild.  “I learned to shoot nine ball and bought a couple of junk bikes.” Working on and riding those junk bikes was one of the major reasons Geisel missed out on classroom time at local Stebbins High School.

Still, he got good grades and went on to a vocational school, where one of his teachers encouraged him to take the SATs. “I was a junior,” says Geisel, “and I was like, ‘I don’t know what the SAT is.’”

“See, no one in my family had gone to college,” says Geisel, “and no one really knew how to get there and no one expected you to go.”

When he did take the SAT, Geisel did well enough to garner several scholarship offers and attended the tiny Rose-Hulman Institute of Technology in Terra Haute, Indiana. That was where he studied physics and where he realized he didn’t actually want to be a physicist.

Halfway done with his physics degree, Geisel hopped on one of his infamous junk bikes and roared off across the country.

He wasn’t a stranger to long motorcycle rides—while his peers were studying at Stebbins, Geisel had often been riding the highways and byways of America and hiking on the Appalachian Trail. On one memorable occasion, he had ridden all the way to Council Bluffs, Iowa.

Geisel headed southeast to Virginia Beach to visit a friend on his naval base. Security was not tight; Geisel got on base by holding his driver’s license upside-down and mingling with a crowd of naval personnel.

“I slept in their bunks, ate their food…I took a jacket home,” Geisel confesses.

There were a few close calls. One day while bodysurfing, Geisel lost the keys to his motorcycle on the beach.  His friend was supposed to be on duty that afternoon, so a rapid search for the keys ensued. When they were finally found, an even more frantic motorcycle ride got Geisel and his friend back to base in time.

Geisel finally abandoned military life when he was awakened in the middle of the night so he could slip out of the barracks before bed checks.

“I slept in the woods a few nights after that,” he says.

Geisel had to give up his adventuring when he met the girl who is now his wife. Pam was the same girl he had crushed on in high school, but he says at the time “she was not noticing guys with motorcycles and long hair.”

He finally convinced her to give him a shot, and their first date was on the Fourth of July. He took her for strawberry milkshakes, on the back of his motorcycle, of course.

Pam was the one who asked Geisel what he was going to do for the rest of his life—she wasn’t sure that riding a motorcycle around the country was a viable career.

That was when Geisel found his true passion – he wanted to study writing.

“So when I was in my late 20s,” he said, “I finally went back and did what I was supposed to do. With physics and math stuck in my head.”

These days, Geisel teaches creative writing at Wright State – the same school where he earned his B.A. and M.A. in English. Now, he does work that excites him every day. He has published several short stories and edited a literary magazine and an anthology, and teaches eager English students the tricks of the trade.

Though he used to commute to campus on a motorcycle, he has since traded it in for a car. Geisel said that Pam told him that the most important thing was for Geisel to come home safe at the end of the day, so he “parked the bike for good.”