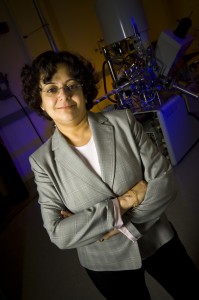 Sharmila Mukhopadhyay has partnered with MetaMateria Technologies LLC and three other companies in a proposal titled “Water Purification using Nano-Enabled Solutions.” She is also working with several other universities, federal laboratories and local companies to expand Wright State’s involvement in the area of clean-water technologies.

Polluted streams, rivers, lakes and municipal water may soon be getting the Wright State treatment.

Sharmila Mukhopadhyay and her researchers are developing near molecular-sized  “nano-brushes.”

These fuzzy structures have bristles made up of thousands of tiny, jellyfish-like strands. The increased surface area of the bristles, with proper coatings, allows them to behave like powerful cleaners that kill bacteria and destroy contaminants that pollute water.

“It absolutely should work,” said Mukhopadhyay, Ph.D., director of Wright State’s Center for Nano-Scale Multifunctional Materials. “I’m pretty excited about this because the potential, I know, is huge.”

The need to efficiently purify water is mushrooming into a massive global issue as human and industrial consumption of water grows.

The United Nations estimates that about 1.1 billion people currently lack access to safe water. Several forecasts suggest that freshwater may become the “oil” of the 21st century – expensive, scarce and the cause of geo-political conflicts.

In the United States, aging water-treatment infrastructure is struggling to keep up with growing threats to the clean-water supply, making water purification a major energy expense. Technologies like the “nano-brush” may provide some relief.

Mukhopadhyay has partnered with MetaMateria Technologies LLC and three other companies in a proposal titled “Water Purification using Nano-Enabled Solutions.” The proposal received a total of $999,998 from the Ohio Third Frontier program. She is also working with several other universities, federal laboratories and local companies to expand Wright State’s involvement in the area of clean-water technologies.

Mukhopadhyay’s research has resulted in the development of the water-purifying nano-brushes.

Different materials can be broken down into nano-particles and then attached to the bristles of the brushes.

For example, particles of silver kill bacteria on contact without being dispersed as pollutants in the water. Particles of palladium break up carbon-tetrachloride and other water pollutants. And particles of titanium oxide can zap pollutants when activated by sunlight.

Mukhopadhyay plans to attach three or four different kinds of water-purifying particles to the nano-brushes.

“So simultaneously you can combine multiple environmental cleanup applications into one single component,” she said.

The brushes could be used in fresh-water pollution control, in water-treatment plants or even in small home water filters. They could also be used in filters that soldiers could carry to purify water in remote undeveloped areas.

Some of Mukhopadhyay’s nano-brushes are currently being tested in the laboratory for near-future deployment in the field. She said they could be in active use on a small scale within a few years.

The nano-components even have applications outside water purification. For example, they could potentially be used in biomedical devices to fight infections in implant operations, reducing the need for antibiotics.

“We are not exploiting this to the fullest extent,” said Mukhopadhyay. “I feel if we invest more in developing this technology, it can really make a positive impact on a large number of industrial products.”