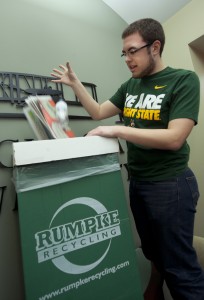 Wright State student Dan Baker is pitching in for RecycleMania. Are you?

Four weeks into the national competition, Wright State University is 4th out of 252 universities recycling at a rate of 44.12%

“We are certainly doing better than last year, but we need to kick it into high gear,” said Wright State Custodial Service Manager and RecycleMania Coordinator Gina Reese.

Reese says it’s time for staff to pitch in by throwing out heavy recyclables from their workspaces.

“We are encouraging offices to submit a request for a recycle tote to dispose of old files, records, magazines and catalogs,” said Reese. “We need everyone’s help and support to remain competitive in this competition.”

Visit http://recyclemaniacs.org/scoreboard/participating-schools?node_id=10385 to follow Wright State’s progress in the 2012 RecycleMania.

That’s a lot of recycling weight, and it was good enough for 123rd out of 630 participants in the 2011 RecycleMania tournament, a national competition between hundreds of universities and colleges across the country.

RecycleMania is a friendly competition and benchmarking tool for college and university recycling programs to promote waste reduction activities to their campus communities.

“Everything can be recycled with the exception of anything that’s been contaminated with food waste and plastics that are not bottles,” said Reese.

Wright State has participated in the contest since 2006 and steadily improved its poundage through the years, but Reese says now’s the time to get serious about recycling.

“Students, faculty and staff, they just need to recycle everything they can,” said Reese.

Whether it’s RecycleMania season or not, Reese said we can all do better at sorting our recyclables. She said her custodial staff is already doing it one staffer at a time as they clean receptacles across campus.

“I know that we are improving, and I’m thrilled with that, but compared to some schools in California that are really committed and recycling at 70%, we can always get better,” said Reese.

Currently Wright State recycles at a rate of about 32%.

Recyclables are collected from main campus, off-campus locations and the residence halls every day. Greater participation from faculty and staff in Wright State offices might make the biggest difference of all.

“When you stop and think about it, everything coming out of that office can be recycled—except maybe your lunch,” said Reese.

According to Reese, there’s a considerable monetary incentive to improve recycling too. She said campus recycling efforts saved the university $14,000 in landfill fees in 2011 and the cardboard recycling specifically was sold for another $14,000 last year.

Whether you do it to help the university save money, win RecycleMania or just for Mother Earth, Reese said there’s never been a more important time than now to fill up those green cardboard Rumpke recycling boxes across campus.

“We need to save our environment. If we don’t recycle and we send everything to our landfill, just imagine what our world is going to look like for our grandchildren, their grandchildren and beyond that,” said Reese. “One massive mess.”