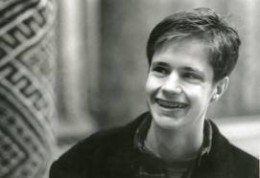 "The Laramie Project" captures the reaction to the 1998 murder of University of Wyoming gay student Matthew Shepherd (pictured) in Laramie, Wyoming.

A play by Moises Kaufman and members of the Tectonic Theater Project, The Laramie Project captures the reaction to the 1998 murder of University of Wyoming gay student Matthew Shepherd in Laramie, Wyoming. The murder was denounced as a hate crime motivated by homophobia and brought attention to the lack of hate crimes laws in various states.

In collaboration with events for a series of events at Sinclair Community College dubbed Laramie at Sinclair, Wright State University’s Department of Theatre, Dance & Motion Pictures is hosting a public reading of The Laramie Project Sunday, April 29, at 7 p.m. in the Herbst Theatre at the Creative Arts Center.

In an uncommon mix of students who are and are not studying theatre at Wright State, members of the student group Allies will join theatre students in the performance.

“I hope this reading can help us all broaden our tolerance, not just for the homosexual community but for all people, and help to erase some of that fear that is born out of what we don’t understand,” said Marya Cordes, Wright State assistant professor of acting.

The show at Wright State will be one of several performances that will precede a series of events that comprise Laramie at Sinclair. Organizers hope it will lead to greater tolerance for people from all backgrounds, races, religions and sexual orientations in the Dayton area.

“If you don’t want anybody to be a target of hate in our community and you want a healthy community, I think you’ll want to be a part of this, especially the diversity walk and candle light vigil,” said Kathleen Hotmer, Sinclair adjunct theatre professor.

Laramie at Sinclair events include:

Diversity Walk/Candlelight Vigil featuring the Dayton Gay Men’s Chorus starting at the Garden Station at the corner of 4th street and Wayne Avenue in Dayton.

After-Party Fundraiser, featuring the Rubi Girls at the Trolley Stop at the corner of  5th street and Wayne avenue.

Visit www.facebook.com/Laramie.at.Sinclair to learn more about Laramie at Sinclair and how you can get involved.