Wright State University has formed partnerships with three universities in central China as well as a world-class museum at a spectacular archaeological reserve and mausoleum of China’s first emperor.

Memoranda of Understanding were signed with the museum and schools during a trip to China in May led by Provost Steven Angle.  The delegation included Stephen Foster, associate vice president for international affairs; Yi Li, dean of the College of Science and Mathematics; and Carol Loranger, chair of English Language and Literatures.

“It gives us a lot of visibility in a part of China where we’ve never been before,” Angle said. “And it puts us in a position to recruit high level, academically well prepared Chinese students to Wright State.” 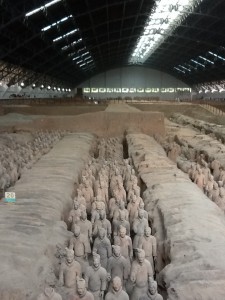 The Museum of Terracotta Soldiers and Horses of Shi-Huang-Di is a collection of life-size terracotta sculptures depicting the armies of Qin Shi Huang, the first Emperor of China dating from 3rd century B.C. It will now be available to Wright State faculty and students for study.

The Chinese universities with whom the agreements were signed are expected to send their students to Wright State to study English, engineering, business, math and science.

“We already have a very strong presence in northeast China,” Angle said. “This visit expands our presence in central China.”

During the recent visit, Wright State officials also made stops at the Taiyuan University of Technology and Capital Normal University in Beijing.

Wright State also forged a partnership with the Museum of Terracotta Soldiers and Horses of Shi-Huang-Di near Xi’an. It is part of an archaeological site and mausoleum in which thousands of terracotta soldiers and other figures depicting the armies of China’s first emperor, Qin Shi Huang, were unearthed.

The funerary art was buried with the emperor in 210-209 B.C. to protect him in the afterlife and was discovered by some farmers in 1974. The mausoleum is a World Heritage Site, listed by the United Nations, Educational, Scientific and Cultural Organization as of special cultural and/or physical significance. Last year it attracted 5 million visitors. 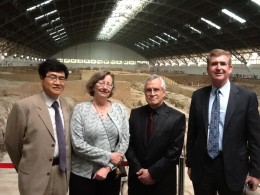 (L-R) Yi Li, dean of the College of Science and Mathematics; Carol Loranger, English chair; Stephen Foster, associate vice president for international affairs, and Steven Angle, provost, pose for a picture at the Museum of Terracotta Soldiers and Horses of Shi-Huang-Di.

The Wright State delegation was given a special tour of the museum’s labs, which are working to restore and preserve the terracotta figures, which are made of a clay-based ceramic.

Under the agreement, Wright State experts would go to the site to conduct research aimed at expanding the excavation and better protecting and displaying the mausoleum. The university would accept students from the museum seeking to learn more about conservation, historic preservation and exhibition preparation.

Foster said the Museum of Terracotta Soldiers and Horses of Shi-Huang-Di is probably one of the top museums in the world to have a formal relationship with a university.

“This is a phenomenal museum,” said Angle. “To give Wright State students and faculty the ability to work and study there is just an incredible opportunity.”