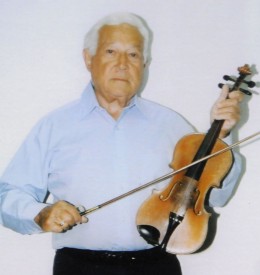 Each year, Wright State University pauses to remember Kristallnacht, or “The Night of Broken Glass.” On this tragic night in 1938, Nazis organized widespread attacks on Jewish people and businesses throughout Germany and Austria, ushering in the beginning of the Holocaust.

This year’s program features Holocaust survivor Robert Kahn discussing “The Collapse of Moral Judgment in Nazi Germany.” The free, public event will be held on Wednesday, Nov. 14, at 7:30 p.m. in the Millett Hall Atrium on Wright State’s Dayton Campus.

As a boy in pre-war Germany, Kahn and his family were terrorized by Nazi storm troopers on Kristallnacht. Kahn’s school and synagogue were burned. When he came home, he saw his father beaten and mother tied up. The Nazis burned their furniture and looted the apartment. As they did so, they forced Kahn to play his violin for a watching, jeering crowd. This violin is now part of the “Prejudice and Memory” exhibit at the National Museum of the U.S. Air Force in Dayton.

The Kahns later fled to Luxembourg, but again came under Nazi control when the Low Countries were occupied in 1940. Kahn was able to escape through France and Spain to the Canary Islands and then went to the United States, where he was reunited with his parents. He fought with the U.S. Army in the Pacific theatre and later attended the University of Oklahoma. In 1946, he joined the Intelligence Section at Wright-Patterson Air Force Base, where he received awards and remained until retirement. He lives in Dayton with his wife, Gertrude, and has three children and seven grandchildren.