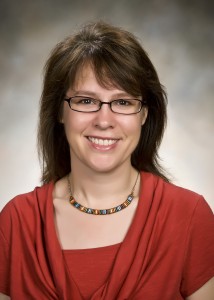 Kate Excoffon, Ph.D., assistant professor of biological sciences in the College of Science and Mathematics

The first human gene therapy approved for use in Europe owes its development in part to a Wright State University faculty member.

Kate Excoffon, Ph.D., assistant professor of biological sciences in the College of Science and Mathematics, played a key role in developing a drug known as Glybera, which is designed to treat an extremely rare disease that disrupts fat metabolism and causes severe pancreatitis attacks.

Glybera, a product of the Dutch company uniQure, won approval from the European Commission after its final evaluation, making Glybera the first human gene therapy approved outside of China. It could lead to approvals of other similar therapies waiting in the wings.

Excoffon’s role in the drug’s development was identifying and testing the gene used to fight the disorder.

The announcement was one more accolade for Excoffon, who has already earned distinction since joining Wright State in 2009. Earlier in 2012, she was selected for the President’s Award for Early Career Achievement and for the Southwestern Ohio Council for Higher Education Faculty Excellence in Teaching Award.

The award noted she had secured two highly competitive grants from the National Institutes of Health, established a collaborative research project focused on HIV, published papers in top journals like Proceedings of the National Academy of Sciences, Journal of Virology, and PLoS One. Excoffon has become a sought-after national speaker and has earned a reputation as an excellent teacher at the undergraduate and graduate levels.

Excoffon’s role in the gene therapy began years earlier, when she was pursuing her Ph.D. in genetics at the University of British Columbia in the late 1990s. She was studying ways to fight a rare fat-metabolism disorder known as lipoprotein lipase (lpl) deficiency, the lack of an enzyme that breaks down fat. 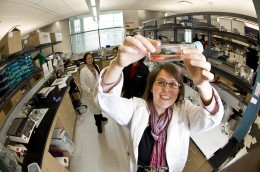 Excoffon has become a sought-after national speaker and has earned a reputation as an excellent teacher at the undergraduate and graduate levels.

“People with this deficiency basically can’t digest their fat once it gets into their body,” Excoffon said. Without this enzyme, tiny globs of fat circulate through the body and deposit into tissues.

“One of the places it can be really bad is in the pancreas. Over time, people who suffer with this condition can have a pancreatic attack, and often it can be life threatening,” Excoffon said. Until now, the only treatment has been a diet devoid of fat.

In people with the deficiency, a gene needed to make the enzyme is defective, and the optimal treatment is to replace the defective gene with a healthy copy.

Gene therapy works by having a gene hitchhike into the body using a common, virus that is harmless. “We take out the guts of the virus and insert our gene,” Excoffon said. The virus is injected into muscle tissue, where it invades muscles cells and produces the lifesaving protein.

Of course, there was a catch to this method. Since the virus couldn’t replicate on its own, it couldn’t distribute the gene throughout the body, and it only produced a small amount of protein. Treating a patient this way would have required massive injections, Excoffon said.

Excoffon started looking for variations of the gene that might do a better job, and she found one.

Using this gene, the same amount of virus was able to produce thousands of times more protein. Potentially, only one treatment is needed to cure the disease, she said.

More research was needed to arrive at a successful therapy, but Excoffon’s discovery was crucial.

While her name is on the patent, Excoffon doesn’t expect the new treatment to lead to riches.

“It’s an ultra rare disease, so it’s highly unlikely that I’ll ever get a penny out of it. What I think is very exciting is that there are people who have been helped by this therapy.” As a result of clinical trials, she said, “There are patients who are walking around right now who aren’t suffering pancreatic attacks because of something I started when I was a Ph.D. student.”

Even more exciting, she says, is that this approval is likely to reinvigorate the whole field of gene therapy, which seemed moribund for years because some tragic clinical failures had dampened hopes of getting treatments approved.

“It provides hope that these therapies could be approved.  I think that’s the biggest thing, that a lot of the pharmaceutical companies just haven’t had hope,” Excoffon said.