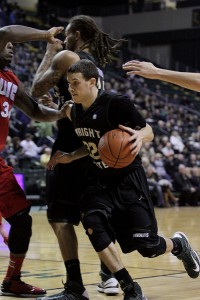 Cole Darling led Wright State with 11 points, but he was the only Raider in double figures. Matt Vest had nine rebounds.

The Wright State men’s basketball team could not overcome a 12-point halftime deficit as the Raiders fell to UIC 55-49 Saturday night at WSU’s Nutter Center.

JT Yoho put the Raiders up 8-4 with a three at the 14:33 mark of the first half, but the Flames dominated the next nine minutes, going on a 20-2 run in building a 14-point lead.  A Jerran Young jumper and two AJ Pacher foul shots cut the deficit to 10, but Wright State went scoreless the final 4:26 as an Anthony Kelley basket made it 26-14 at the break.

UIC shot 46 percent in the first half compared to just 24 percent for Wright State.

After Josh Crittle opened the second half with a basket to extend the margin back up to 14, the Raiders answered with a 10-1 run, four each by Cole Darling and Kendall Griffin, to make it 29-24 with 14:20 to play.

Wright State came as close as 38-36 on a Darling layup with 5:25 remaining, but could get no closer as UIC’ Marc Brown followed with a three-point play and Gary Talton scored 12 points over the final 4:19.

Darling led Wright State with 11 points, but he was the only Raider in double figures.  Matt Vest had nine rebounds.

Wright State (14-7, 5-3 Horizon) continues the three-game homestand on Wednesday, January 30, with a 7:00 contest against Detroit.