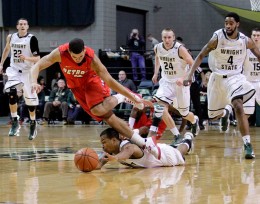 Sophomore guard Reggie Arcenaux dives after a loose ball in the Raiders Jan. 30 loss to Detroit.

An 11-0 Detroit run late in the second half broke open a one-point contest as the Wright State men’s basketball team fell 83-76 to the Titans Wednesday night at Wright State University’s Nutter Center.

Detroit led 13-7 early before Wright State tied it with six straight points, including a Reggie Arceneaux three.  The Titans later went back in front 19-14 following a Ray McCallum triple, only to see the Raiders turn the tables and take a 32-26 advantage with an 18-7 run.

A JT Yoho three at the 2:12 mark put Wright State up nine before Detroit scored the final eight points of the period, including a McCallum three just ahead of the horn, to make it 41-40 at the break.

The Titans shto 59 percent from the field in the opening 20 minutes, six of 11 from behind the arc, while the Raiders shot 48 percent and were seven of 18 from three-point range.

The two teams were tied six times in the second half and neither team had more than a three-point lead as Arceneaux hit two foul shots with 7:24 remaining to draw Wright State to within one at 66-65.

A Doug Anderson layup, though, started Detroit on its decisive 11-0 run and the senior forward added five more during the streak that saw the Titans go up 77-65 before Yoho broke the string with a free throw with 1:52 left.

The Raiders cut the deficit to 81-76 on two Joe Bramanti foul shots with 11 seconds left, but would get no closer as McCallum hit a pair at the stripe with eight seconds to play to round out the scoring.

Detroit continued its hot shooting in the second half, hitting 13 of 26 shots to finish at 54 percent overall, including nine of 19 from three, while Wright State shot 41 percent in the second half, but was just two of 16 from behind the arc, to end up at 45 percent for the game.  The Titans also hit 22 of 35 foul shots compared to 17 of 21 for Wright State.

Jerran Young led the Raiders with 14 points off the bench while Arceneaux had 12, Kendall Griffin 11 and Cole Darling 10 along with nine rebounds.