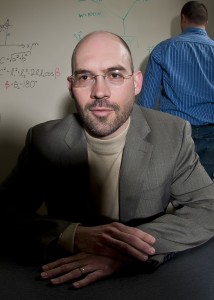 Nathan Klingbeil, who has spent 14 years as a teacher, researcher and administrator at Wright State’s College of Engineering and Computer Science, has been selected as the next dean.

Klingbeil, Ph.D., will assume his new post May 1. The campus announcement was made April 25.

Provost Sundaram Narayanan said Klingbeil is extremely well-poised to lead the college on a path toward preeminence.

“His well-balanced background has prepared him to effectively recruit engineering and computer science students, produce graduates who serve the economic needs of the market, develop nationally recognized programs in research, and solidify Wright State’s role as primary anchor of innovation and entrepreneurship in the region,” Narayanan said.

Klingbeil arrived at Wright State as an assistant professor in 1999. Prior to his current appointment as senior associate dean, he was named the Robert J. Kegerreis Distinguished Professor of Teaching, director of student retention and success, professor, and associate dean for academic affairs.

“His teaching has spanned the entire continuum of engineering education, from pre-college and first-year engineering mathematics through graduate courses at the Ph.D. level,” Narayanan said.

Klingbeil is a three-time recipient of the college’s Excellence in Teaching Award and was named the 2005 Ohio Professor of the Year by the Carnegie Foundation for the Advancement of Teaching and Council for Advancement and Support of Education (CASE). He and his fellow researchers have been funded seven times by the National Science Foundation, and he has led externally funded research and education projects totaling over $5.6 million.

Klingbeil succeeds Narayanan, who was named provost in March. Lang Hong, Ph.D., served as interim dean during the search process.